Favorite Quote:
This is what is hardest: to close the open hand because one loves. -Friedrich Nietzsche

in Just- spring, when the world is puddlewonderful... -e. e. cummings

“Summer surprised us –”
It was very poetic,
the way we woke up one day and found
that warmth had clambered up the Chesapeake,
settled between the cherry blossoms of the District,
the chilled marble of the monuments.

I was not there to see it –
not really. I was seated diligently at the piano,
making disgracefully stubborn gestures up and down
ivory teeth, as if I were being chewed. I was busy delving
into the scarred and burnt pages of Eliot,
wishing I'd smelled the archduke's roses
or seen the Starnberger See in May-gold light.

Bach takes me to the seaside,
the acidic tang of ocean air and
for some unnamable reason,
lemons. Oysters drowning in lemons.
I can almost see the blurred horizon,
a gray-blue wash, can almost feel the water.
Prelude, fugue, wide oceanscapes, the roar
of a thousand drown'd souls.

The Potomac is a river built on dilemmas.
I've seen it as it throttles the city it runs by,
watched it from the top of the Kennedy Center,
the intricate workings of Beethoven sonatas fresh in my mind.
Perahia played Bach the way Eliot played words:
like a mystic, but he played Beethoven like a drunken czar plays king:
with rushed, red-faced vigor. That is not to say I ­disliked it;
I hated it, I hated it very much.

Because Beethoven is not anger, he is anguish.
Beethoven tears me off to lashing snowstorms, to scaling Everest.
I can't play him without feeling a burn rush up my arms,
the searing pain that accompanies tension always.
He makes me believe in death and Hell and despair.
I put it down to malleability, the desperate urge to feel something,
anything at all, other than mediocrity.

Debussy is a deluge, Mozart an Austrian pastoral ­farmscape.
Prokofiev is accompanied, for some reason, by black and white photographs of dead children.
Tchaikovsky: a high, white cliff with sheep
strewn across it, the bellwether marching to the top
and leading them all over the edge. Rachmaninoff, a fervent kiss in a dark corner, a dead candle,
a battlefield.

Once I saw a picture of the Danube
and wanted to be there so badly,
all I could bear to listen to for a fortnight was Strauss.
Once I read “The Waste Land” and forgot it was fiction.
I cried into my pillow and shoved the book away,
listened to requiems until I knew I was going to die
so certainly that I nearly threw up.

“O O O O that Shakespeherian Rag –”
I hold a special place in my heart for poetry.
Ironically, it is far from the place where I hold my music.

My teacher said that I must know Chopin
as I know my own soul –
that is to say, I must add, not well at all.
I felt like correcting him. He should have compared
my soon-to-be-intimate knowledge of Chopin
to my already-intimate knowledge of my hands, face, hair.
I don't know my soul at all, because I don't want to; I'm terrified
of what I may find when we two become friends.

(Chopin, by the way, removes me to funerals,
horses screaming until merciful bullets shatter their skulls –
a morose love-poem written on the inside of poor Yorick's skull.
Chopin makes me wish I was nothing
but some beautiful woman's aether.
He makes me believe in passion, if nothing else.)

You know you love someone when you know their every detail,
their hideous secrets, their hidden grotesque corners,
and still want them anyway, still long for their touch.
I love Chopin – the svelte poise of his notes,
the unrepressed heartbreak, phrases like filigree.
You're afraid to play them, what if they break?
I cannot bear to hate him, he elicits too much pity.

There were cherry blossoms in the air
the day I first read through his F-minor piano concerto –
written first, published second, did you know? –
and that was the day I swore to never read Eliot
again.

Visions of dead horses and daydreams of the ­Starnberger See:
they do not belong together. 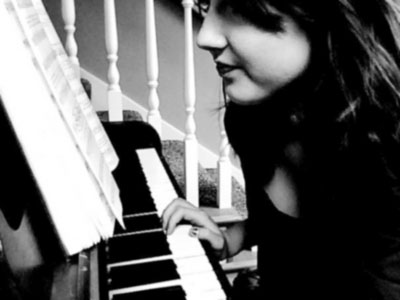 The author's comments:
I read too much Eliot, I listen to too much Chopin...
Post a comment
Submit your own

treebookgirl said...
on Sep. 7 2010 at 6:32 pm
I am in love with this. I am also a classical pianist, and your descriptions of the composers and the feelings they invoke were so similar to my own that I couldn't believe someone else could feel that way and see that way. I am playing Prelude in C#Minor by Rachmaninoff right now, and "a fervent kiss in a dark corner, a dead candle, a battlefield" was so accurate, so perfect, that I played the climax of the piece over and over, picturing candles and battlefields as I made the crescendo, and it just worked. Ahem. I'm sorry. I will stop now :)
Tormented_Corset said...
on Aug. 24 2010 at 8:18 pm
Very, very beautiful. Very accurate...I get a sense of graceful contridiction from this piece... It sings. this writer certainly has a bright and meaningful future. Loved it.
sparkofheart GOLD said...
on Jun. 2 2010 at 7:29 pm
sparkofheart GOLD, Plymouth, Minnesota
16 articles 2 photos 253 comments

View profile
This was simply amazing. I loved how you showed that each piece of music, or their composers, rather, have a different story behind them and a different emotion. it was terrific :)
ZiXiang Zhang SILVER said...
on May. 26 2010 at 5:02 pm
ZiXiang Zhang SILVER, Ridgewood, New York
5 articles 0 photos 9 comments
View profile
This is very very impressive. Insight, and brilliant delivery. However, some stanzas do seem like fillers and take away from the impact of the piece...I'll leave it up to you to decide which lines/stanzas aren't necessary to the poem. However, this is truly an amazing piece!
float_away SILVER said...
on May. 26 2010 at 1:30 pm
float_away SILVER, Pheonix, Arizona
6 articles 2 photos 15 comments

soooo long! but so evenly good :)

the more the merrier!