Favorite Quote:
“And then there are the times when the wolves are silent and the moon is howling.”
- George Carlin

What cretin roams the man-made paths lined with colors of white and yellow?
What roars and rumbles and creaks down neighborhoods and cities?
It is a beast that possesses no known
emotion and does no wrong.
It operates by human hand and will only work when the care taken to have it
operational is employed.
But how much operation is too much
operation?
Instead of controlling the beast, are we
becoming part of it?
I've seen these metal monsters lumbering down these paths;
Noise-creating and gas-guzzling objects
that demand room,
Room they will get no matter what.
I've seen people behind the wheels of these monsters transform into something
unrecognizable;
Transform into something inhuman.
Man versus machine has become man and machine with these creatures.
They are noise-creators.
They are gas-guzzlers.
And now, they are easy to anger,
irrationalize, and quick to let out that
primal warning sound of the machine's and their discomfort with their situation.
It's an ugly transformation and I witness it every day.
As a human who is considered barbaric by this mechanical delegation, for I am
mobile by use of my feet, I am a prime viewer of this dark change.
Is there still time to make things right?
If so, don't become the beast that has
controlled you!
It is a battle that can be fought and won.
Don't let its power consume you.
Be a barbarian for a day.
Cut off the umbilical cord to this creature and be born again in your own right and not by the right of the lifeless.
You are human, after all. 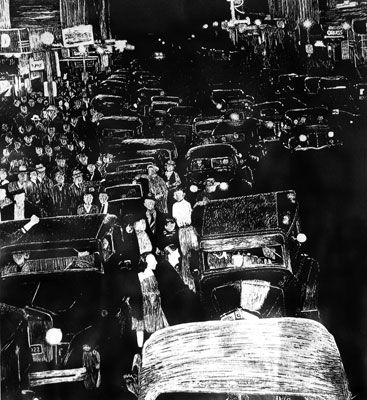 The author's comments:
I am not demonizing all motorized vehicles (I use them too!), but I just think it has reached a point where it's becoming a bit of a troublesome situation.
Post a comment
Submit your own