Rock star,
drug addict,
or geriatric on the rebound from cataract surgery,
she said,
are the only legitimate personas for sunglass-wearing.

But what about style and flirtation and Jackie O?

What about beaches
and tan lines
and ocean-stained copies of Time?

What about adolescence
and wrinkled hot dogs
and the velvety shores of Jersey?

Do you have an opinion on the grammatically stunted drugstore novel
or the vulgarity of toe rings?

What of that sapphire swimsuit that’s missing three jewels
and chapped lips
and that obscene practice permissible only after achieving a stupefied state of tourism (long after fanny packs and card decks) known as bike-renting?

Seriously, Mother, what do you make of chuckling quietly at women
whose shrunken, upturned noses can’t support their aviators,
or that psychedelic rainbow emitted by misshapen lenses,
rivaled only by oil leaks in the parking lots of supermarkets?

Nonsense. UV rays are fictionalized by the same people
who invented evolution and
global warming
and NASA.

No daughter of mine shall subscribe to that mongering,
that hullabaloo.
You’ll just have to squint.

But when she turned, I shaded my rusty eyes anyway,
if for no other reason than to shield myself for a little while against that blinding
light source
called humanity. 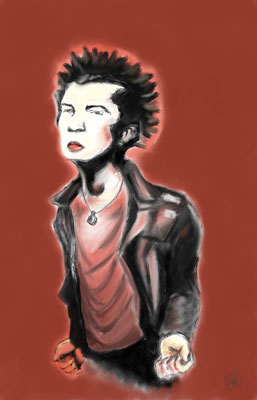 This article has 86 comments.

Favorite Quote:
"How can you know it, if you don't even try?"--Coldplay :)

View profile
Really good. I loved the imagery. It ran together real nicely as well.  Could you check out my work? I don't have alot up yet but I could use some feedback.
tori-gurl PLATINUM said...
on Aug. 12 2012 at 7:12 pm
tori-gurl PLATINUM, Norwich, New York
32 articles 0 photos 85 comments

Favorite Quote:
smile through everything no matter how bad it gets because it could be worse and if it gets worse well then it can only get better. :)

View profile
You are seriously gifted! I love the metaphors it was a really beautiful poem and it was very good. The last line really makes you think and is just a very good way to end such a creative piece! Keep writing :D
Polish person said...
on Feb. 15 2012 at 12:48 am
Love the attitude darlin keep it up!
laurensoccer SILVER said...
on Feb. 10 2012 at 5:25 pm
laurensoccer SILVER, Palm Beach Gardens, Florida
8 articles 0 photos 67 comments
View profile
This is most definitely one of my favorite poems. Your comparisons are so creative!!! Keep writing!!!!!
muna.najihah PLATINUM said...
on Dec. 11 2011 at 12:02 pm
muna.najihah PLATINUM, Malacca, Other
25 articles 14 photos 26 comments

I love how you make the attitude of the poem. its feels good reading it. with a question mark behind sentences, it makes me think as well.

please check my work, my luck is running out. please comment/rate it.

Favorite Quote:
We wouldn't ask a rose that grew from the concrete for having damaged petals; in turn we'd all celebrate its tenacity, we'd all love tz will to reach the sun well we are the roses n these are my damaged petals don't ask me why thank God and ask me how

View profile
5/5 stars! I'm loving this! :) Keep writing.
Could you check out my poem "Ghosts of the Past" and rate/comment? Would appreciate it.
peaceandloveandjesus said...
on Aug. 18 2011 at 5:16 pm
this is so cute! i love your attitude! who is your inspiration, because this sounds a little billy collins-y?
Inkslinger BRONZE said...
on Jul. 27 2011 at 2:43 pm
Inkslinger BRONZE, Chattanooga, Oklahoma
2 articles 0 photos 21 comments

Favorite Quote:
"Our deepest fear is not that we are inadequate. Our deepest fear is that we are powerful beyond measure. It is our light, not our darkness that most frightens us.' We ask ourselves, Who am I to be brilliant, gorgeous, talented, fabulous? Actually, who are you not to be? You are a child of God. Your playing small does not serve the world. There's nothing enlightened about shrinking so that other people won't feel insecure around you. We are all meant to shine, as children do. We were born to make manifest the glory of God that is within us. It's not just in some of us; it's in everyone. And as we let our own light shine, we unconsciously give other people permission to do the same. As we're liberated from our own fear, our presence automatically liberates others."--Marianne Williamson

View profile
Beautiful! I love the writing, the message, and the entire attitude behind it! Amazing!
peartree18 BRONZE said...
on Jul. 5 2011 at 1:24 pm
peartree18 BRONZE, Brigthon, Michigan
3 articles 0 photos 4 comments

Favorite Quote:
Ally sits next to me in the computor lab today in bio...best day of my life

View profile
this poem can really relate to things in the real world today...i love the last stanza. its my favorite
ashleyX13 PLATINUM said...
on Jul. 5 2011 at 10:57 am
ashleyX13 PLATINUM, Memphis, Tennessee
32 articles 0 photos 50 comments

Favorite Quote:
"I've made mistakes; not one regret." Alyssa Nicolson

Favorite Quote:
"The owl of Minerva spreads its wings only with the falling of the dusk" -H.W. Hegel

"Words are our most inexhaustable source of magic' -Albus Dumbledore

Favorite Quote:
"Be who you are and say what you feel, because those who mind don't matter, and those who matter don't mind." -Dr. Seuss

Favorite Quote:
"Be yourself, everyone else is already taken"

This is so deep and it carries out such a subtle but powerful message, aaah. I really truly think this is an amazing piece of poetry!

*Its a favorite of mine

Favorite Quote:
i know that you believe you understand what you think i said, but im not sure you realize that what you heard is not what i meant.

View profile
exactly. i love the way the mother is. and i would have to say the last verse had topped it with perfection. this is worded with sarcasm wonderfully. i like. :D
Jule92xc BRONZE said...
on Nov. 27 2010 at 6:42 pm
Jule92xc BRONZE, Smithsburg, Maryland
3 articles 0 photos 22 comments

Favorite Quote:
"It's not who I am underneath, but what I do that defines me..." -Batman

View profile
Awesome job. I really liked the very last part that says "if for no other reason than to shield myself for a little while against that blinding light source called humanity." Nicely done!