He sat at his desk and he read all day.
He read about science, and foul play.
He could name all elements and fossils that were on display.
He could tell you everything he knew in a day.
But he could not for the life of him grasp in a way.
One single mate or a lady friend.
To him it was harder than calculus, rocket science, and Greek.
Why would he joke to him if he was weak?
Why would they bully each other when they could speak in love?
How could anyone be so weak?
You have to be strong and be strong for a long long long long long long long long time.
So why were the birds and the cats all asleep?
And why did they kill each other when they both could eat?
He read about all that he could in a book.
But he couldn’t understand what was wrong with his hook?
He could never get the crowd because he was afraid to speak?
What if he pissed people off?
So he did and he did and he did it again.
To him he put humanity first.
So he wrote and he wrote and he wrote once again.
So he never did anything, nothing for him.
But everything that he did was for him.
He was the kindest villain you would ever meet.
The most brilliant idiot that one could see.
The friendliest enemy that you could have.
The most committed prankster you ever could meet.
He would work day and night to plan out these pranks.
The most innocent harmer that one could ever see.
And he sat on his long dreaming of ways to someday change the world.
He knew they would work if they rest of the world just said he was right.
And he knew that he was.
But who could question the world?
The world was full of thieves and criminals dressed as butlers and maids and lovers.
Playing their parts so well that even they had forgotten it was just a part.
So they walked and they walked.
And he thought and he thought.
And one day, he went and saw.
That once when he spoke, the thieves gave him credit.
And filled his sore ego so much.
That he ran to them and he said they were right.
So he became one player to.
And the game was so fun and the pranks were so grande.
He loved what he thought was good fun.
Well the thieves were so good and the thieves were fond, that the idiot thought them his pals.
So he told them of things that he never told anyone before.
He told them of all of his thoughts on the world.
And of all that he had dreamed realistically on his logs.
And they said they weren’t dreams and that that was so good.
But then one day, his good pals stole his money.
So what was the idiot to do.
His brilliance stabbed him in the back once again.
And he just didn’t know what to do.
So he went back to his log
and wrote his realistic daydreams of how he may change the world
and he thought and he thought and he didn’t even know
What he could say or think
So he wrote and he wrote about all of those dumb stupid clever thieves
If only they knew
he thought
They could have been me
They could have been heroes and princesses and done good things for the whole world to see.
If only they knew me and loved me and maybe if someday they’d see
So he sighed as he sat on his log once again.
And he dreamed of some better day.
And he dreamed of some better world once again.
And he dreamed of some better day.
And he had clung on to what he knew was wrong because for him it was some other day.
He wanted what he couldn’t have so much because to him it was his better day.
What he couldn’t want
And what he couldn’t have
Yet he knew that he knew better than that.
But sometimes he wanted to be like the thieves
It’s so easy and fun and you live in the moment and don’t care what anyone thinks.
You judge and you judge and you just have your fun.
And sometimes it looks so free.
And maybe you get hurt once and again but you take all the money in the end.
And you put yourself first and say that you steal for the poor.
And its never okay to steal for anyone, but you get to make it your thing
You steal from the rich and piss off the pricks
and you steal for the poor and give them their kicks
and you tell yourself that it’s right
and you tell yourself again and again until eventually you steal from your friends.
And the brilliant idiot looks like a fool to the world.
But maybe just maybe he’s the one who knows best. 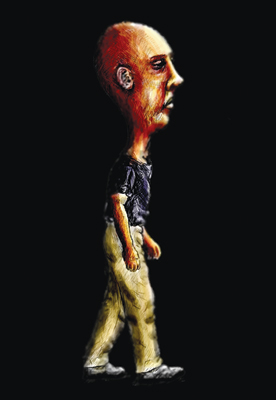 The author's comments:
This piece is meant to be up to interpretation. It is meant to be about those people who don't always fit in with the crowd, and how the crowd better wake up and realize that the ones they pick on in school are really the genuises who are responsible for everyone they later enjoy: If it weren't for the "nerds" which is already an unfair name, we wouldn't have computers, iPads, or tvs.
Post a comment
Submit your own

Favorite Quote:
"I will never let schooling interfere with my education." (-forgot who it's by though)
also "When the power of love overcomes the love of power the world will know peace."-Jimi Hendrix

Favorite Quote:
"I want a life that sizzles and pops and makes me laugh out loud. I want my everyday to make God belly laugh, glad that he gave life to someone who loves the gift, who will use it up and wring it out and drag it around like a favorite sweater." -SN

View profile
Thanks for voting this number 1!!! It made my day! :)