That Was Then This Is Now | Teen Ink

That Was Then This Is Now

Favorite Quote:
Continuous effort - not strength or intelligence - is the key to unlocking our potential.

Hinton fabricated a uniquely diverse set of characters. Bryan is the antagonist whom under goes a change of maturity (going from a hoodlum-like kid, to a sensible young man.) Mark is completely static as he desires a life on the streets and doesn't see anything wrong with violence or drugs. Kathy (Bryan's girlfriend) foils Mark. Kathy is a good girl and with high morals, mother-like qualities, and an admiration for her brother M&M. M&M is Kathy's younger brother and was friends with Bryan's and Mark previous to their relationship. According to the book M&M views the world with a child's innocence, but is gullible. It was enticing to see how Hinton kept some of the same characters from, “The Outsiders,” but still maintained their personalities. For example, Tim and Curly Shepard were still the leaders of the gang. Tim was still the tougher one and Curly remained his side kick. Poneyboy was in the novel as well it is implied that he is to be infatuated with Kathy, showing that he still admires the, “good girls,” opposed to the greasy broads.

The plot isn't as strong as Hinton's previous books. The rising actions are of Mark bringing home mysterious sums of money, Bryan dating Kathy, M&M running away, and Bryan getting jumped by the Shepard brothers. All of the following bring tension into Bryan and Marks relationship, the book at this point it relatively slow pace. Then M&M was found in a hippie house with a bad reaction to LSD, and then Mark is arrested for dealing drugs. It is almost as if there are two climaxes as the book suddenly became chaotic.

The resolving actions are depressing and make you want to bawl, however that is what S.E. Hinton intended. In the end the friendship between Bryan and Mark is completely broken, and makes the story seem depressing. It ends with such bitter emotions that in the 1985 motion picture on the novel the end was manipulated to make it appear more Hollywood friendly. A more joyful ending could have made it a storey of triumph and friendship. The events prior to the ending are so sad that the ending leaves a bitter taste in your mouth. If the book ended joyfully the plot could have greatly improved. Thou it as Hinton's vision for the book to end on a sour note, most people would have preferred a positive ending.

In Conclusion, “That Was Then This Is Now,” is a metiocre read for teen audiences. It has amazing and dynamic characters. Unfortunately the books lacks plot and a satisfying ending. The storey is recommended to fans of her previous book, “The Outsiders,” but be warned, I won't be as well done. 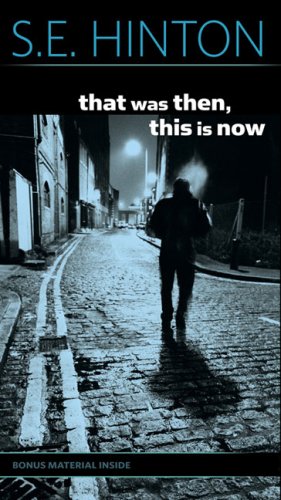 and personally i loveeed the ending, with the whole ''but an old friend once told me, that was then this is now''