When She Was Good | Teen Ink

When She Was Good

When She Was Good
By: Norma Fox Mazer


When She Was Good by Norma Fox Mazer, in my opinion is one of the greatest books ever written. The main character, Em Thurkill starts off as a 14-year-old girl who is from a broken family. Her mother, Veronica Thurkill struggles with her silent depression, meaning that she never lets anyone know how she's feeling. Her father, Raymond Thurkill, is an alcoholic who at numerous times abandons the family. Her older sister, Pamela Thurkill physically and emotionally abuses her. Em Thurkill, struggles to live as a normal person because of the neglect and mistreatment her family has caused her.
During the next few years, Em's world falls to pieces. Her mother, dies from a mysterious illness. Her father, as a result of his wife's death, takes his alcoholism to a new extreme and abandons his two daughters with little money and nowhere to live. (They were soon being evicted out of there trailer house.) And Pamela… begins her reign of dictatorship over Em.
Eventually, Em and Pamela get an apartment together. Because of Em's “stupidity”, Pamela is constantly hitting her and putting her down. One day, seventeen- year-old Em pushes Pamela over the edge by making a “rude” remark. This makes her so mad that Pamela picks up a pan and throws it at Em's arms. This stressful, violent action sends Pam's body into shock and causes her to die of a heart complication.
Now Em is all alone and must survive the world by herself with the voice of Pamela ringing in her mind. Em tries to live normally but somehow, even though Pam is dead, her voice still echoes in Em's ears. Every decision she makes, every thought she thinks, Pamela is there screaming in her ear all kinds of curses and swearwords. Em thought that living with Pamela was hard, but the real hard part is living without her.
I loved this book because Norma Mazer has a style of writing that made me feel as if I was Em Thurkill. She used descriptive words to pull you into Em's twisted world of misery and pain. But at the same time, Mazer left you wondering what her next move was going to be toward her goal of happiness. Overall, I would recommend this book to anyone who likes reading realistic fiction books.
This is a story of a hope for a brighter future and for a rebirth of a broken soul. This book is mind gripping and keeps you flipping pages wondering what's going to happen next. How will she ever make it on her own with Pamela dictating her thoughts? I can't tell you what happens to Em Thurkill in the end, but if you would like to know, check the book out yourself! 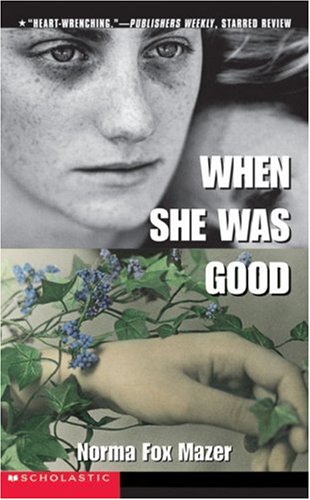