Raiders Night a book taken place in a town called Nearmont takes us through the eyes of a football team and how they have their down falls. As a team they are able to over come there problems. Matt an18 year old is starting his senior year of high school. He is the captain of the Raiders it seems as though he has everything in the world; good grades, girls, football, but when an event happens what is the captain suppose to do about it? “Should we have stopped it, he thought? Could we have? We? Me”?

In Raiders Night Robert Lipsyte themes of the book were sacrifice and suffering. These themes are shown through Matt through out the book. Here is an example of sacrifice and suffering from the book. “He thought I was the captain”……..” So what if I say something and there's an investigation and my seasons cancelled and I don't get a mayor division 1 scholarship and I go to a no named school. Close to home. Dad on my back? Is that better? Who does that help? The great descriptions of the characters made it easy to follow along in the book. I the book the problems dealt with and problems people deal with everyday. How there are pros and cons to every decision made.

Raiders Night is a lot like Friday Night Lights Except with a lot less drama and more intense, action filled parts, and great character descriptions. Raiders Night shows how a team can have their down falls and come up on top for one player. A quick paced book makes it a lot easier for the reader to read; they will feel like they're there every minute. Don't decide you don't want it because you are a girl, you don't even have to be a football fan. If you enjoy intense books you will definitely like Raiders Night. 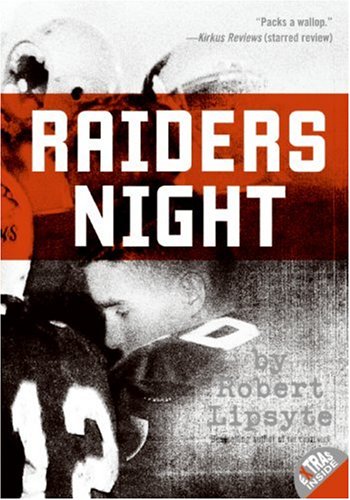 Favorite Quote:
Equal in weight, equal in size, equal in everything but my eyes. Love is a dark red world of pain with lightning flashes of happiness.