A Good Scent From a Strange Mountain. | Teen Ink

A Good Scent From a Strange Mountain.

A Good Scent From a Strange Mountain. The title seemed to jump out at me from among all the other books on the shelf. “Huh,” I thought, and reached for it. It was a relatively narrow, sober looking book with a Pulitzer Prize sticker on the cover that claimed to be a collection of short stories about Vietnam. I took it, thinking that I would like to know more about Vietnam, about the conflict that caused such turmoil in our country in the sixties and seventies. The book turned out not to be about the actual war at all, but about the deep, lasting spiritual and psychological impact this war had on the lives of Vietnamese immigrants to America.

The book encompasses fifteen stories, written and published at various points and then compiled to form a provocative and hauntingly beautiful work. The stories span the lives of Vietnamese immigrants of all ages, classes and religious persuasions, exploring their thoughts and memories from a point of view that is at once distinct to each character and representative of the uniquely soulful voice of the Vietnamese as a people. The lengths of the stories vary, from a saddening six page tale of a father who tries to teach his ten year old American son the joys of cricket fighting; to a twenty-two page amusing anecdote about a man with a wayward and beautiful wife who goes to a New Orleans voodoo man for advice on how to keep her; to what is virtually a novella about the complexities of marriage, inhibition, and the war-torn psyche of the Vietnamese immigrant.

These characters, along with a cheerful, kindhearted bar girl from Saigon who at last finds happiness with a long-nosed Louisiana car mechanic and tells her story in rough, halting English; the embittered tycoon who is determined to own two of John Lennon's shoes so that he can step out of the refugee community and find his place in the world; and the lonely girl who calls herself a “child of dust” and reads the letters her father wrote when he was trying to convince the government to allow her entry into the United States, all carry the book along, pulling you in and submerging you in voices from another land.

When I picked up Robert Oland Butler's exquisite masterpiece, I was expecting a collection of war stories, perhaps about young, traumatized American GI's complete with fears, desires, and dirty language. Instead I got a book that is a deeply moving portrait of a culture and mindset far different from any I have known. Narrated by men and women, elders and children alike, the simple clarity of the words Butler uses to convey a people that has suffered unbelievably both in their own land and in ours rings with a resounding truth that will stay with you long after you turn the final page.

This will certify that the above work is completely original. 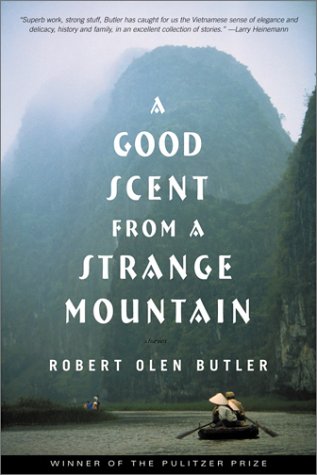