The Wild Girls by Pat Murphy

The Wild Girls is a novel about two young girls, Joan and Sarah, both struggling with their lives at home. Joan’s family is very organized and clean and judgmental. Her parents form their first impression of somebody usually by what they look like, how they speak and act. Joan’s parents prefer let nothing show, make their family seem perfect. Unfortunately, her parent’s relationship cannot be covered up like it was before. Sarah’s parents, however, are the opposite. Her parents are messy and careless. Appearances don’t matter, it’s what is inside is what matters most. Sarah’s father was writer but he looked as if he was apart of a motorcycle gang. He drove a noisy motorcycle, wearing a stained tee shirt and jeans and a large tattoo scrawled up his arm. When Sarah was young, her mother left, she felt that Sarah would have a better life with her not around. She was an alcoholic; sometimes put together, but most of time not. Sarah hadn’t heard from her mother in seven years, until an unexpected letter from her appears in the pile with her father’s fan mail. All those years, Sarah had formed the idea that her mother had turned into a fox. The same fox that sometimes a night appeared near her house in the woods. She called herself the Queen of Foxes, Fox for short. After the letter, she was crushed by the fact that the only reason her mother was coming to see them was to get an official divorce so she could marry another man. Sarah and Joan, Fox and Newt – Joan wanted another name that took her to another place, A place where she wasn’t Joan. She became Newt, strong and confident. Nothing could touch her when she was Newt – struggled to block out their daily dose of drama at home. Finally, Fox and Newt found a way to release their pain, confusion and anger. Writing. They could take themselves to worlds that did not exist. Newt and Fox could make themselves powerful and fearless when in real life they were not. During the summer, they took writing classes taught by a writer who had loved the story Fox and Newt had written for school and insisted they’d join. Throughout the course of the summer, Fox was challenged to find another way to look at her relationship with her mother, now that she could no longer believe her mother was a fox watching over her. Newt’s family fell apart. Her father moved out and her brother was caught drinking and smoking from the stress of the broken family. But also during the summer, Fox and Newt learned more about themselves and their loved ones than they imagined they ever could.

In the novel, I found two quotes very meaningful, helpful and interesting. “I read books when I was a kid, lots of books. Books always seemed like magic to me. They took you to the most amazing places. When I got older, I realized I couldn’t find books that took me to all the places I wanted to go. To go to those places, I had to write some books myself.” – Gus, Sarah’s father. I love this quote because it is so true. Books for teens and kids are filled with everything imaginable. When you grow old, books meant for your age become more and more about reality, science, math or boring romance. To go to the places you want to go, you might just have to create the world yourself. The second quote I found interesting and I still can’t completely grasp the concept, but I guess that’s why I liked it so much, too. “Any liar can make things up. But a good writer is more than just a clever liar. A good writer tells the truth by telling lies.”


I found the book wonderfully written. My favorite form of writing is first person limited and that was the format that Pat Murphy chose. The author wrote the book so that I wanted to be fed more and more. I couldn’t put the book down because Murphy wrote it so enticingly. After one chapter finished I needed to read the next one. Finally, I enjoyed that the author wrote the book from a young girl’s perspective, but did not make the writing immature.


In my opinion, it is the best book you could ever read. It is my favorite book, and I have read numerous books. Before, I never thought I would have a favorite because all the books were so craveable, but nothing compared to the attachment I felt to this. I am inspired to be a writer and this was right up my alley. It was based on two girls my age about perusing the hobby I love. I would recommend this book to all girls about ten or older. Some schools even have this book on their summer reading list! I could not put this book down, and I guarantee that girls like me will act just the same. 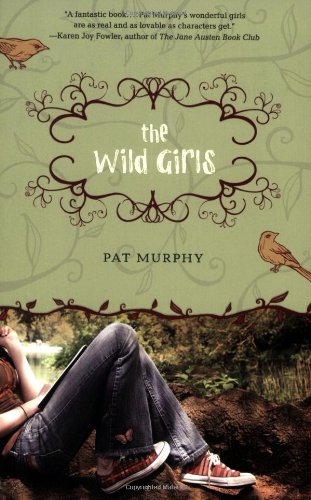 
Buy from Amazon
The author's comments:
This book can be found at Barnes and Nobles and probably a Borders Book store near you.
Post a comment
Submit your own