Handle with Care by Jodi Picoult

Before their daughter was even in this world, her parents Charlotte and Sean O'Keefe knew she would face hundreds of broken bones. This devastating relization came after they learned that her bones don't form properly due to a condition called OI. Willow broke seven broken bones in her mother’s womb, and four more were broken during her journey into this world.
By the time she is Five, her family knew that the look on Willows face, or crack following a fall was yet another broken bone, and another trip to the hospital. They have also accepted she will never grow taller than 4ft, and will face limitations in her movement for the rest of her life. Her older sister Amelia feels isolated from the rest of the family, and finds herself angry and self-hating of her own body. These factors make every day life for her mother a constant tug-o-war between caretaking for Willow and worry because of the changes she sees in Amelia. She and her husband also begin to wonder how they’re going to pay for everything Willow needs.
In a desperate attempt to gain money to go towards treatments and general care for Willow, her parents decide to go for a "wrongful birth" lawsuit against their OB/GYN. They claim that if they had known about Willows condition earlier in the pregnancy, they would have terminated the baby. As if this story wasn’t crazy enough, there OB/GYN happens to not only be there doctor, but also the mother's best friend, and the person who has been there for everyone in the family since the birth of Willow. As this family begins to unravel over the lawsuit, the oldest daughter Amelia begins to feel downright neglected by her mother and father, starts to spiral downward towards being bulimic, and hating everyone in her life.
This book unravels chapter by chapter through the eyes of each main characters. There is a different light that each in brings to the book, and the emotions of everyone involved are synced together perfectly. You can really feel the pain that each character is facing, and it’s interesting to see how they cope when faced with life’s many obstacles. Handle with Care is impossible to put down because the characters are all intertwined with each other, and it is never clear how the book will end. While you read, you will probably find yourself unsure of how you want the book to turn out. You want the family to have enough money to care for their sick child, and also provide a better life for the entire family. But you also know the parents are actually saying to their daughter and everyone else that they didn’t want to have her. 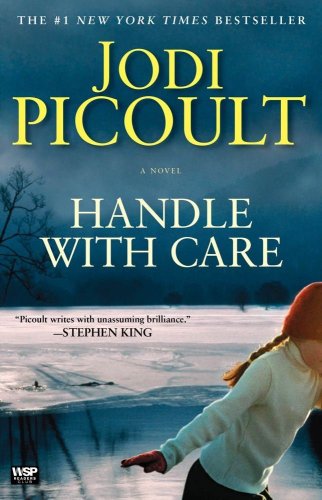 
Buy from Amazon
The author's comments:
I loved this book so much, I wanted to share it with everyone on here!
Post a comment
Submit your own

Favorite Quote:
"All those other girls, well they're beautiful, but would they write a song for you?"-"Hey Stephen" by Taylor Swift

View profile
I've never read this book (nor any by this author), but this review was amazing! Amongst my favorites!
MariahBoBiah SILVER said...
on Jul. 18 2010 at 4:28 pm
MariahBoBiah SILVER, Austin, Texas
7 articles 2 photos 22 comments

Favorite Quote:
"Yeah, I got one. Does Barry Manilow know that you raid his wardrobe?"-The Breakfast Club. :D

View profile
I absolutely LOVE Jodi Picoult's writing. I just read this book about two months ago. Although this was not my favorite of hers, I absolutely loved it. I did not like Charlotte AT ALL though. I couldn't believe she sued for something such as a wrongful birth. My parents had a baby boy who was born with a mental illness, and nobody would have ever considered suing for a wrongful birth. The book really opened a lot of people's eyes on this situation.
Maryluvswriting said...
on Jul. 14 2010 at 9:28 pm
I loved this book! This review potrays it great!!!