These days, it is hard to find a book in the teen section of a bookstore that is not about vampires, werewolves, or other immortal creatures. But for faithful believers in the book industry, persistence paid off. Vixen, by Jillian Larkin, does not follow this overused mystical formula. Instead, it speaks of a time that will not soon be forgotten: the Roaring Twenties with its flappers, speakeasies, and gangsters. Vixen has not been released into the public yet; however, it comes out soon on December 14.
Gloria Carmody, engaged to be married before the start of her senior year in high school, is expected to follow a certain lifestyle. Gloria’s wealthy, high-society family arranges for her to be married to well-respected Sebastian Grey for the sake of maintaining their family’s reputation. Little did she know, her engagement is nothing more than a business deal, not the fairy-tale love story she had imagined it to be.
When Gloria wants to venture out of her insulated, overprotected life, the deal disintegrates. She starts partying at some of the most infamous speakeasies in Chicago and even forms a forbidden friendship with an African-American pianist. Ultimately, Gloria is faced with choosing between the welfare of her family or her own happiness.

Vixen is written from the perspective of three different characters: the main character, Gloria; Lorraine, her self-centered “best friend;” and Clara, her wild cousin and reformed flapper. Lorraine, although having the best intentions at heart, is blinded by her own self-image, feeling shadowed by her best friend’s perceived perfection. Clara, hoping to keep her wild past in New York a secret, adopts the nickname “Country Clara” in order to portray an innocent image in Chicago. Although centered around Gloria, each story has its own unique conflict and provides the reader with a taste of teenage drama: 1920s style.

A sign of a good book is staying up past two o’clock in the morning on a school night, unable to put it down until the last word is read. This was me, anxiously flipping through the pages of the book that had constantly been on my mind. Vixen incorporates all the aspects that contribute toward this page turner: mystery, romance, and danger.
It was a refreshing change to not only avoid reading a book based on mythical creatures, but to become so involved in a story that provides insight on the Roaring Twenties. I had studied these times in history class, but reading this book brought the characters to life, and more importantly, it gave the era significance. I absorbed myself into the lives of these three young women, amused at how similar their problems were to those of the Twenty-first Century.
Vixen is the first novel of Jillian Larkin, who just graduated from New York University last year. Larkin plans to continue writing about these characters, as Vixen is only the first of The Flappers series.
Closing the book after finishing the last sentence, I found myself disappointed. How am I supposed to wait for the second book to come out, if the first book has not even been released yet? It is going to be a long, anticipated wait, but if the second is any like Vixen, it will be well worth it. 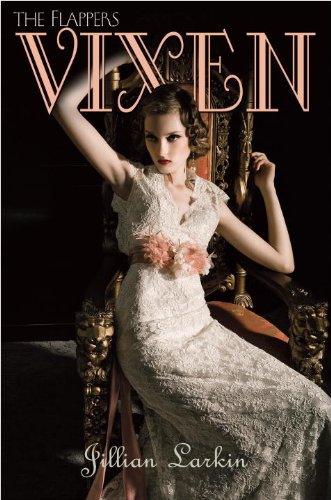 
Buy from Amazon
The author's comments:
Written for my school paper...
Post a comment
Submit your own