Siddhartha chronicles the life of the character with the title name and his spiritual journey to rid him of his Self and find complete peace. It is set in India in the time of the Buddha, when people flocked to him to try and learn his secrets to achieving Nirvana. The novel begins when Siddartha is a young adult and ends when he is old and gray. He meets and makes friends with many people along his way, and also loses friends. He makes choices unusual to his people at that time, and rejects his teachers to learn wisdom himself.

The story is beautifully written, smooth and flowing, almost like a Bible. Hesse expresses Siddhartha clearly through his words until you feel like you are walking along with him on his quest to find unity and completeness in himself. The character Siddhartha is a wanderer, thirsty for knowledge. He at first is arrogant and proud. He sees himself above the world and finds people and their daily lives childish. As he progresses through his life, though, he learns to love everything around him and become one with the world.

The whole story revolves around religion and seeking the spiritual Self. Hinduism and Buddhism are major influences throughout the book. Siddhartha starts off a Brahmin and isn't satified with the the sacrifices and the holy scriptures. He and his childhood friend Govinda leave their homes and go off into the woods to join the Samanas. They rid themselves of possesions and meditate to seperate them from their conciousness. Still, Siddhartha seeks something more. After meeting the Buddha, the Illustrious One, and rejecting his teachings, he goes and becomes rich and lazy and a compulsive gambler. He sinks into the pits of despair and travels to a river thinking about suicide. Instead of throwing himself in the river, he finds it speaks to him. He learns from the river along with another ferryman about mankind and Nirvana. In Hinduism, Nirvana is when a person finds inner peace and ends their cycle of lives for one final life before passing into eternity. Siddhartha learns about life and people and ultimately achieves Nirvana. 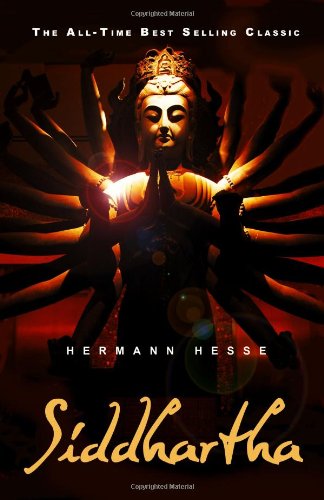