Vampirates: Demon of the Ocean by Justin Somper | Teen Ink

Vampirates: Demon of the Ocean by Justin Somper

“I’ll tell you a tale of the Vampirates,
A tale as old as true…”

The Vampirates: Demon of the Ocean is a book by British author, Captain Justin Somper. The story revolves around the lives of the twins, Connor and Grace Tempest, and the two worlds of pirates – the human pirates and the vampirates, the vampire pirates.

When the twins’ father, Dexter Tempest, died, they were left with nothing but the choice to let a couple – who were looking for pets instead of children – adopt them or to let the orphanage take care of them. Choosing none of their available choices, they “stole” their father’s boat that was taken by the bank and sailed the sea, hoping for a new life, new beginning.

But destiny always had a way of its own. When a storm hit the sea, the twins’ plan for new life shattered. Their boat was wrecked and they almost died. But Connor was saved by a human pirate while Grace was saved by a vampirate, both hoping that each other was alive. This is where the story of finding each other begins. Will they find each other… or will they be separated forever?

This book is great, and so is the author. It is not just a read-it book; it is a read-it-and-think book where you want to know what will happen next before turning the page. I couldn’t even put it down even when the night was already putting my eyelids down!

I would recommend children, teenagers and adults of all ages to sail this book and meet the vampirates. That is, if you want something new and original and hate a boring book. 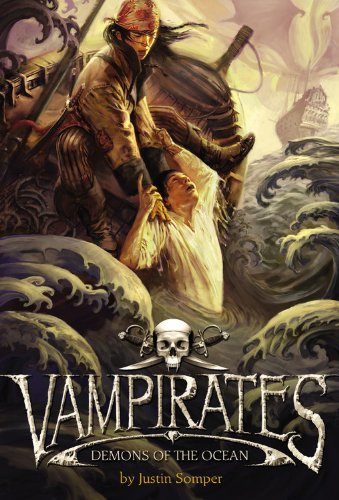 
Buy from Amazon
The author's comments:
After a friend's persuasion, I read the book. After reading the book, i found myself wanting for more. After reading the second, third and so on book, I wasn't that satisfied. I wanted more. C'mon there, people! You will love this. Justin Somper is a great captain. I mean, writer.
Post a comment
Submit your own

JessicaQ PLATINUM said...
on May. 1 2012 at 8:54 pm
JessicaQ PLATINUM, North Vancouver, British Columbia, Other
23 articles 5 photos 28 comments
View profile
I have never heard of this book before! But now that I've read your review, it seems very interesting!
Mystiecub said...
on Sep. 3 2011 at 8:36 am

Interesting review, I might just have to check it out. I've got a book review / report pending (Chinese Cinderella- The True Story of an Unwanted Daughter, by Adeline Yen Mah) if you'd like to check that out.

Aside from that, this is a pretty persuasive article :)

View profile
I've never heard of this book before but I might have to take a look at it now. You made it sound like something I might read. :)
redhairCat PLATINUM said...
on Jul. 21 2011 at 9:55 am
redhairCat PLATINUM, Pebble Beach, California
47 articles 20 photos 411 comments

Favorite Quote:
"I can do anything!"

View profile
You make the book sound so interesting!