Every so often, a story comes along that has the power to reveal behaviors concerning the human kind that are frightening and yet are simultaneously true to even an uncomfortable extent. Earnest, sincere, multigenerational tales such as those within Louise Erdrich’s Love Medicine are to be treasured, for they reveal what we may fear to admit. The multiple viewpoints and corresponding time periods from which the story is told enhance the subtle, uniquely poetic quality of Erdrich’s work, one which is perhaps the most startling of all aspects within the book. Erdrich does not shy away from exposing the harsh realities faced by her vividly portrayed characters. She instead embraces the brusque rebellion and emotion expressed in terms of domestic violence, alcoholism, and promiscuity to serve the overall purpose and message of the book, but does so in a way that evokes feelings of nostalgia and empathy within the readers towards the characters. Love Medicine is a collection of interrelated short stories. The connections formed between two families across the span of the book are not necessarily unexpected, yet often times clarifying and enlightening within the core of the tale. The individual perspectives provided may prove to be complicated to comprehend at first glance, but ultimately amount to a suitably well-rounded, if complex, whole. The language utilized by the characters in the book serves to accentuate their individuality, as it differs with each new character that is introduced. The book contains numerous reflections on religion, culture, and tradition, which could easily be a distraction to the character-driven style employed by Erdrich. However, these reflections are weaved in and out of the words on the pages gracefully in order to deliver a moral that is particular not just to the character in question but to all within the book, and, furthermore, to the world we live in itself, one in which we eagerly turn the page of exquisite novels such as Love Medicine. 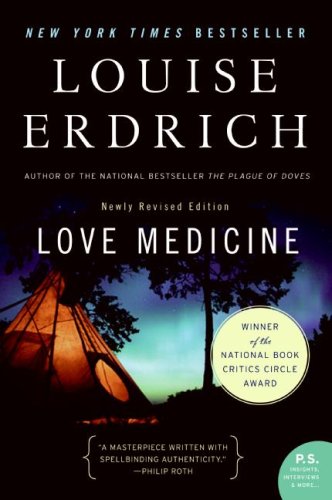