The Reluctant Fundamentalist by Mohsin Hamid

It was a while ago that I had finished reading the Reluctant Fundamentalist, so forgive me if I am not apt with all of my observations. There are not many books ever written that people finish reading, without putting it down at all (toilet and meal breaks not included, of course); but this one literally made me stay put to my seat. Maybe, it was the short length of the book or maybe I was in this raging reading mood that day or maybe, every time I turned a page, I wanted to hold on to Changez a little longer.

The story was simple and that’s what made it even more realistic. Changez, in my opinion was a metaphor for all those Pakistanis who believe there is hope in their country and are trying to remember it’s glorious culture, to help them stand up to the dominant west. The story as many people describe is not about Islamophobhia, although it does play a big role in the book. The Reluctant Fundamentalist is about a Pakistani man, narrating to the big burly man (who in my opinion is a metaphor for the West, specifically the USA) about him making it big in New York and finally being accepted in as a New Yorker (Quote, ‘). It is the fact that an educated Pakistani youngster is narrating his story to an American man, that adds a unique touch to this book. It is about a struggle of a man who is so influenced by the western way of life, that he loses complete touch of his roots. I will try and not read too much into the book and make unnecessary assumptions, but there are some things in this book that stare you right into the face. The simplicity adds to its uniqueness and it’s narration structure, must be applauded. Hamid, has used the narration structure beautifully; the fact that Changez is the only person speaking throughout the book, may have come off as boring; but on reading this book, you feel like you are sitting right there at the ‘dhaba’ (a road side open restaurant, not considered fancy) along with him and the American man, eavesdropping on an interesting conversation.

There are some touching scenes and such true life observations, that they made me sit back in my chair and think. And think. And think. And then I realized, ‘Hey! This has happened with me before.’ Or ‘Hey! I know what Changez really is trying to say here, because it is so true.’ Little incidents in the book, make you that much closer to relating with Changez. All of us, might not relate to the very same parts, but at the ending of the day he is a human being, even though he belongs to a country with a different religion and culture. His complex relationship with Erica (his friend, who he loved) was not sappy and fairytale like. Changez’s futile attempt to bring her back from the hole of her past that was sucking her in, is a life lesson in itself. The change that Changez faces post the 9/11 and how he almost turns his world upside down, all because of that one incident that changed the United States, changing Changez as well. When his side of the world was in complete chaos, and his homeland was under so much pressure, the reader is made to realize, that no matter where you live and no matter how successful and happy you are, the heart lies where the heart lies.

Read this book, because it is not a clichéd account of a Muslim man post 9/11, it is a simple and realistic tale of how, at the most unknown of times, it’s the love and hope for one’s country that helps a man through the toughest of struggles and the most demanding situations. The ending of this book that has blown many away (me being no exception), tends to overshadow people's view of this book.But for those of you, who will go forward and read this book, be prepared for the ending, because it'll be stuck to the back of your mind like gun sticks to hair. Hamid, is a brave, brave man to have taken something as delicate an issue as the 9/11 into account and written about it so fearlessly and beautifully. 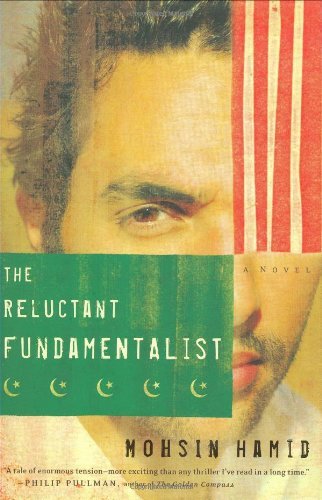