Left to Die by Lisa Jackson

Favorite Quote:
Yes it's hard to write, but it's harder not to.

A serial killer is plaguing the small town of Grizzly Falls, Montana. He captures women, pretending to rescue them from the accidents he created before tying them to trees for the consistent snowstorms to finish them off. With three women already dead, Detectives Regan Pescoli and Selena Alvarez struggle to pinpoint the “Star Crossed Killer” before he strikes again. With only the killer’s strange message to go with, they battle through the constant snow storms and their own personal lives to figure out who this relentless killer is. But do they go too far to find out the truth?

"Crack! Pescoli automatically ducked at the sound of the rifle blast and reached for her sidearm. She felt the bullet hit her tire, even heard something ping against metal. She straightened behind the wheel as she realized what was happening. The killer? Hit… me? The car spun, turning wildly, rotating around and around. The edge rushed up. Oh no! Faster and faster the Jeep spun out of control. The canyon rim came nearer." ~Expert for Left to Die.

While trying to locate her missing ex-husband, Jillian Rivers’ car tires are shot out. She finds herself rescued from her wrecked car by a mountain man named Zane MacGregor. He takes her to his cabin to heal from her injuries until the snowstorm clears. With his constant departures, Jillian begins to question if MacGregor could possibly be the Star Crossed Killer. Law and Order meets the bitter cold wilderness of Montana in Lisa Jackson’s Left to Die.

Left to Die is a remarkable read, full of suspense and mystery that keeps the reader guessing the ending over and over again. Pages will fly in the urge to find out the truth. Many people didn’t like how Jackson didn’t incorporate the ending in the first book. You had to go and buy the next book, Chosen to Die to find out what happens. Personally, I loved the element of suspense and how you had to keep reading. The detail and the emotions that were included in the piece were outstanding, making you feel like you are working next to Alvarez and Pescoli or fearing for your life with Jillian. The characters stood out to you firmly. You got a dosage of their personalities, their characteristics, and their physical features. The plot was engaging and had you on the edge of your seat.

I would recommend it anyone who enjoys a good mystery with bits of romance mixed in. Left to Die is personally one of my favorite books currently and Lisa Jackson is one of my favorite authors. From strict, intense Selena Alvarez, to crazy old Ivor Hicks who was abducted by General Cyrptor and his Reptilian army, to Zane MaGregor with his mysterious, but seemingly innocent personality, and my personal favorite, Regan Pescoli, a single mother who has two divorces under her belt and a get-it-done attitude, the book has a variety of different characters. Add in a twisted killer, a suspenseful plot and an engaging topic, you’ll have shivers run down your spine and a race in your heart as you read Left to Die by Lisa Jackson. 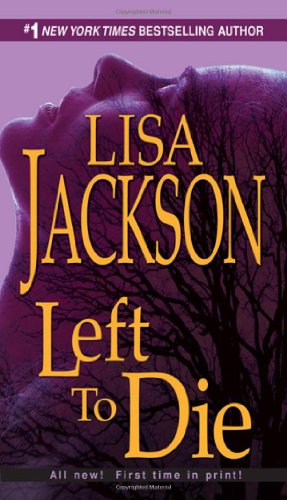 
Buy from Amazon
The author's comments:
Amazing book by an amazing author.
Post a comment
Submit your own