What Happened To Goodbye by Sarah Dessen | Teen Ink

What Happened To Goodbye by Sarah Dessen

If you've read another Sarah Dessen novel then you know what you're in for here: a beautifully crafted teen romance. Mclean's parents had a nasty divorce. Her mom was involved in a scandal that the whole town talked about. Her dad decided to close the restaurant that the two of them had owned together and become a man who goes to other people's restaurants and fixes them. Mclean was supposed to stay with her mom and her friends. She was expected to stay where everything was familiar but she didn't want to. Instead she opted to live with her dad, moving from place to place whenever a restaurant needed help. Mclean took these moves as fresh starts. She reinvented herself in each new place. She took on many personas, from cheerleader to theatre geek to overly active student council member. She was trying to decide who she was going to be in the newest town when all of the sudden she was Mclean again, not any of those other girls. She was true to herself, she made real friends instead of just barely connecting with people and she used her real name. She met Dave and she found herself again. But not in a corny way. The story isn't about how Dave is her savior that encouraged her to be herself again. The reason Mclean was Mclean instead of those other girls happened by chance. She gave her real name to Dave and then she was stuck with it. Dave is an essential part of the story but he's weaved in very neatly. The story isn't just about the blooming romance between Mclean and Dave. It's also about Mclean fixing her relationship with her mother, confessing to her fake personas and finding who she really is again. There are so many great moments to this book and the end just comes together so nicely. If you're a Sarah Dessen fan, or a realistic fiction teen romance fan then this is the book for you. 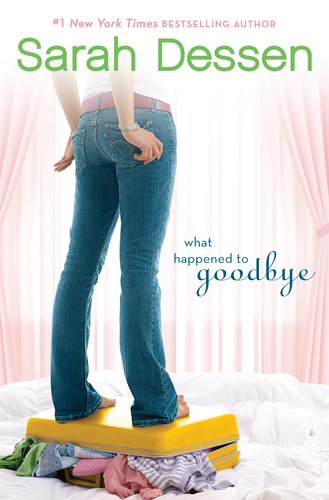 kberns3757 BRONZE said...
on May. 3 2013 at 3:29 pm
kberns3757 BRONZE, Paradise Valley, Arizona
1 article 0 photos 1 comment
View profile
Kayla Berns Ms. Julian English 4, Period F 3 May 2013 What Happened to Goodbye             The romantic story “What Happened to Goodbye” by Sara Dessen  give the common romantic story a little twist. The story is written for anyone to connect and understand. Sara Dessen writes numerous novels that the reader doesn’t need any prior knowledge for. Readers, who are experiencing divorce, love, or loss of self would really enjoy this book. When reading this book you can escape the problems that are going on in your life and take a look into the problems Mclean Sweet is experiencing. After starting this book the reader would not want to put the book down. It’s a fast moving plot that keeps the reader intrigued and keeps them reading. This book is so great because one can reflect on the situations the character is experiencing. The book displays how one teenager copes with her parents’ divorce. One can see how the divorce takes a toll on Mclean and how a certain boy can change her world. Sara Dessen is known for her work. Dessen work makes the reader feel like they are in the book experiencing the feelings the author creates. There will be parts where the reader will put the book down just to wipe away their tears before picking it right back up. The reader will not have trouble trying to comprehend what’s occurring in the book. Sara Dessen is great when it comes to “Staying on track.”  This book will give you inspiration that love does exist even if your circumstances are weird. When I read this I enjoyed the little back stories that tie into the plot. It is appropriate for all ages. When hearing what the main character Mclean Sweet experienced with her parents’ divorce and all the traveling with her father one will grow a warm spot for Mclean in their heart.  Sara Dessen is a great author when coming to romantic teen novels. It is a great way for teens to have hope for that perfect love they aspire to meet one day in their life. I recommend this book to everyone from ages thirteen to adult. Her audience is more of a female crowd, but men could relate to this book as well. Readers will want to read the rest of Sara Dessen’s books after reading What Happened to Goodbye. Go to a local bookstore and start reading! You will not regret it!