Battle Hymn of the Tiger Mother by Amy Chua

‘Battle Hymn of the Tiger Mother’, a memoir written by Amy Chua has sparked heated global parenting debate with its story of one mother’s journey in strict parenting. From the first page to the last, the memoir is downright hilarious and incredibly self-deprecating. The book describes the tale of Chua and her daughters, Sophia and Louisa (also known as Lulu)in their life.
The hype mostly centers on the extreme music practice sessions that in Chua’s own words, resulted in ‘all out nuclear warfare’ or ‘bloodbath’, especially with Lulu. Amy Chua revealed in the beginning of the book that she wanted her children to be well-rounded and that she considered classical music one of the best hobbies. Fetishing difficulty and challenge, she selected the instruments her daughters would play -Sophia plays piano and Lulu played violin, and sealed her fate. Chua worked endlessly with her daughters, making them practice at least one and a half hour each day and double on lesson days. She did everything it took, from driving them everywhere for lessons, buying extremely expensive instruments, taking notes during every class to drilling notes with both of her daughters. Sophia and Lulu had to practice every day, even if they were sick, had dental surgery and even on vacations.
Her insistence on rote repetition gave way to excellence. The results were tough to argue with, Sophia made her Carnegie Hall debut at age 14 and Lulu also won several prizes for her dexterity at the violin. Apart from the awards, there were several instances in the book, where it was apparent that both her daughters grew to love their respective instruments.
Her actions, albeit, mostly proclaimed as ‘psychotic, brutal and selfish’ were in my opinion, unequivocally for the future of her daughters. The incredible accomplishments would only help the girls in their life, whether in their in their college applications or their job application. Learning something never goes to waste, it could only benefit them in one way or another. What some readers fail to recognize is that along with Sophia and Lulu, Amy Chua worked hard every day, too. Harder, since she found teachers, competitions, organized receptions after recitals, put in grueling hours in practice, drilled sections of music pieces with her daughters along with juggling her job and managing the household. Chua herself said that that practice sessions were ‘a never-ending uphill battle, requiring a 24-7 time commitment, resilience, and guile.
The hectic music practice aside, there are several other reasons this book has left a blazing trail of outraged and appalled parents.
For some it was the tale of Chinese- style coercion, when Chua forced her daughter Lulu to play continuously for hours until she got the piece ‘Little White Donkey’ right.
For other readers, it was the story of Chua rejecting birthday cards that Sophia and Lulu made for her because they weren’t good enough.
And then again, for some, it was the incident of Chua calling Sophia ‘garbage’ when she was once disrespectful to her- that pushed them over the edge.
Chua said she has very high dreams for her children and even higher regard for how much they can take. This fact is apparent all throughout the book. She has always held then to a very high standard and expected the best out of them. This may be the reason her daughters are confident, proficient and competent women. When Chua made Lulu practice until she succeeded, she taught her that there is nothing that can’t be done with hard work. Try, try , till you succeed may just be a saying but Chua and her daughters proved this time and again in the memoir.
In response to her mother’s memoir, Sophia wrote an open letter to the New York Post saying “Everybody’s talking about the birthday cards we once made for you, which you rejected because they weren’t good enough. Funny how some people are convinced that Lulu and I are scarred for life. Maybe if I had poured my heart into it, I would have been upset. But let’s face it: The card was feeble, and I was busted. It took me 30 seconds; I didn’t even sharpen the pencil. That’s why, when you rejected it, I didn't feel you were rejecting me. If I actually tried my best at something, you’d never throw it back in my face.” Chua taught her daughters that if they do something half-heartedly, it will be rejected. I wonder why people think this is wrong. Even her daughters knew that if they tried their best, they couldn’t be snubbed.
As for calling Sophia ‘Garbage’, Chua assumed strength in her daughter, not fragility. By holding her daughter to a very high standard, Chua bestowed her with an incredible inner confidence that no can take away. Chua’s rebuke was not to rebuke her daughter but simply to express confidence in her.
As someone who is herself brought up in a Tiger den, it is a great experience, feeling the oneness of a dysfunctional yet loving family. To quote Sophia, who voiced my thoughts exactly, “If I were to die tomorrow, I’d die feeling I lived life to 100%”
In the end, the memoir to me did not seem like an exercise of maternal bravado or a how-to manual, but an honest, loving woman’s earnest attempt to understand her parents, her daughters and herself. 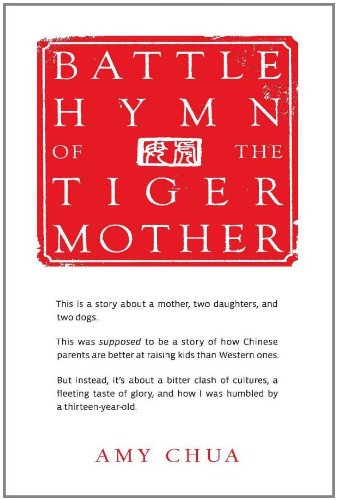 
Buy from Amazon
The author's comments:
This is not exactly a book review, but an article in defence of Amy Chua and all that she did.... and is still doing
Post a comment
Submit your own

Favorite Quote:
'One person's "annoying" is another person's "inspiring and heroic"' - Leslie Knope (Parks and Recreation)

View profile
Wow, fantastic review! Considering I have not read this book it is now added to my long list. Brilliant. Keep it up!
TanviKusum DIAMOND said...
on Oct. 11 2013 at 11:37 am
TanviKusum DIAMOND, Gurgaon, Other
89 articles 4 photos 197 comments

Favorite Quote:
All men who have achieved great things have been great dreamers.
Orison Swett Marden

"The role of a writer is not to say what we all can say, but what we are unable to say." - Anais Nin

Favorite Quote:
Sometimes you just need to take a nap and get over it. -Maura Stuard

View profile
I love this book so I was really interested to read what you had to say. I think you have some great ideas in this piece but a lot of it could be better worded and a bit more organized. There a few careless wording choices that could be avoided. I think you should try to convince the readers of your opinion in a more eloquent way. Since you said it is more of a defense, I think it should be written as an argumentative piece. I loved how you referenced Sophia's letter, that would be awesome proof towards your point. I actually respect Chua's commitment and devotion to her children as well. People can say anything they want about her, but they can't deny how much she cares about her children's future. This piece is really good and I think it has potential to be even better. Congrats on the Editor's Choice. Good luck!
christine said...
on Jul. 26 2013 at 10:32 am
WOW!!!! this was really an eye opener. I used to think Amy Chua was a horrible mother but this article has given me a new perspective ! Keep up the good work !