Since the creation of this rather beautiful world, few people have descended from heaven to suffuse light and happiness everywhere and mesmerize the world with a mere snap of their fingers. And believe it or not, perhaps the only English humorist to stand in this high-rank is P.G. Wodehouse, whose “The Inimitable Jeeves” is a perfect mélange of genius and imagination.
Jeeves is no everyday character. He is a marvelous figment of the old bean’s imagination, and is the brains of the Wooster establishment. He guides his extravagant and foppish master Bertie Wooster in almost every little matter, from the choice of clothes to the escape from Totleigh Towers, where Bertie was caught in a hitch in an installment.
The Inimitable Jeeves is about romance, but in such a different and altered perspective that one is left dumbfound. Wodehouse does not create romantic scenes on starry nights, where two lovers find that the world has shrunk to the two of them and nothing else exists. In fact, Bingo Little, the only character who has a touch of romance in his nature, is always found fluttering from one to the other, never succeeding in his task, but always fresh and eager to saunter forth in a new adventure.
With the wit of a genius, Wodehouse tells us how Wooster imitated being Rosie M. Banks—an author of heart-rending novels in which two lovers of unmatched societal strata marry each other in the face of opposition—to support Bingo’s quest of getting married with a waitress. The tables are turned when the previously parsimonious and high-handed uncle gets so much teary that he marries his own cook and cuts down Bingo’s finances to increase which had been Wooster’s plan, inspired by Jeeves’ rather amazing proposal of Bingo reading Banks’ stories to melt the heart of the old boy.
But Bingo is not without his charms. Later on, he turns up with a revolutionary Bolshevist, only to be escaped by a rather ingenious plan of Jeeves before he rushes out in the open, scimitar in one hand, to stimulate the supposed revolution. This however cuts off his finances completely, when he is found to have been abusing his uncle in public in the guise of a bearded proletarian.
Here one is confronted with the extraordinary taste Jeeves has in terms of food and clothing. He disapproves of salmon and Etonian spats, and although his master Wooster detests being bossed around by a valet, he has to accede to his requests on account of his ingenuity.
And yet in this whole scenario, Bingo’s little additions of short-lived love never cease. In one case, he is practically kicked out of the list because of a mismanaged play enacted in a rural area, where the children throw real oranges instead of the wooly ones at the audience, and Bingo gets the notice for arranging it on purpose while his rival Steggles guffaws silently on having done a good job at spoiling the party.
But Wodehouse gives Bingo Little his share of misfortunes only so far. The most exciting scene comes when Bingo’s uncle, Lord Bittlesham, who has been inspired by Bertie’s supposed love novels to the extent that he has married his own cook, agrees to Bingo marrying a waitress at the Seniors’ Club after a persuading interview with Bertie, only to find that the waitress in question is none other than the original esteemed author of the books Bittlesham adores so much—Rosie M. Banks!
What follows is a flurry of events, inspired by Jeeves’ quick thinking that leads to Bertie escaping Bittlesham’s ire and Bingo ringing the wedding bells.
Wodehouse’s style appeals to the subterranean passages of the mind, for the frontal lobe of the old bean cannot quite keep up with the proceedings. One only realizes the true charm of his prose when one is lying on a couch somewhere, reflecting passively on the sweet and the not-so-sweet memories of auld langsyne. That is Wodehouse’s gift, which makes him such an admirable and (to an extent) adorable personality. 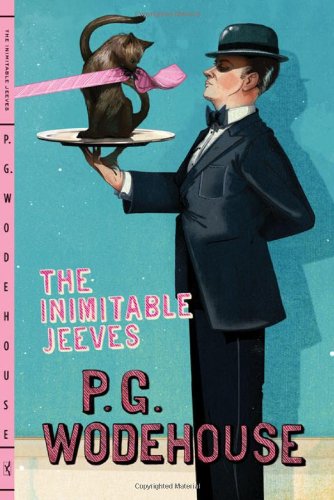 Favorite Quote:
"Look on every exit as being an entrance somewhere else." --Tom Stoppard