Recently, it’s become super cool to say something to the effect of “Oh, I can’t stand Romeo and Juliet! I just don’t like romances, I suppose.” and completely dismiss the work, often prior to even reading it. Let me tell you, all you people who say things like that: you’re wrong. You’re so, so wrong.

At its core, Romeo and Juliet is a tale of children (and adults who may as well be children) who make mistake after mistake, and only mess things up further in their desperate attempt to fix things.

This is not a romance story. This is a tragedy about two stupid teenagers and their petty families who refuse to put aside their differences. This is a story about unrequited love, and obsessive passion. This is a story of deep-seated immaturity, of fate versus free-will, and of desperately trying to fix an ultimately unfixable situation.

Shakespeare’s prose flows beautifully. Some of his best work comes from this play in the shape of he Queen Mab monologue (spoken by Romeo’s very close friend Mercutio, as he angsts about how Romeo is desperate for the love of a woman, and how he [Mercutio] has no desire for it. Make of that what you will) and Juliet’s soliloquy (in which she fears the final outcome of her last-ditch attempt to be with her husband).

This story is so much more than a silly romance. It has so many different layers and so many interesting and rich characters, like that of Friar Lawrence and Mercutio. Thematic elements which continue to permeate even the worst written YA lit today, with talk of sex and death, of fate, and destiny, and of what it means to be so in love with somebody that you are willing to kill and die for them.

Ultimately, this is simply the story of people. People who make mistakes. People who try and fix things. People who, in the end, fail. Don’t stick up your nose to this play, because you are missing out on a intricately crafted, meaningful story that is really just the narrative of human’s emotional relationships to others and how that seeps into and affects our lives.

Don’t skip this work. You are missing out on so much. 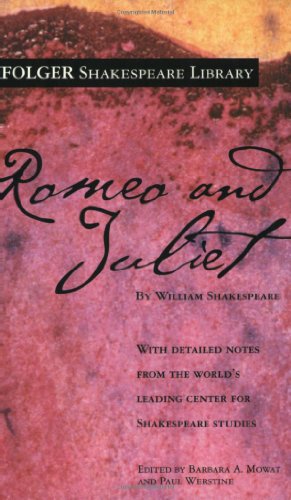 
Buy from Amazon
The author's comments:
I KNOW some of you are already typing up comments along the times of "Oh, I don't read silly romances. Romeo and Juliet isn't even a good romance story, anyway." DON'T.
Post a comment
Submit your own

Favorite Quote:
"Look on every exit as being an entrance somewhere else." --Tom Stoppard

View profile
Hehe. YES. Shakespeare needs more love! I ave no idea why so many teens dismiss him. He writes about life like nobody else.
Libbyluflutesrule said...
on Apr. 3 2014 at 7:48 pm
Libbyluflutesrule, Goshen, Indiana
0 articles 0 photos 1 comment

View profile
When my class read this, I took the opportunity to give the same kind of spiel. Saying, "Hey I'm not your teacher, I'm your peer so when I say Romeo and Juliet isn't a love story, that it has dirty jokes, stupid teenagers,and all that other stuff you enjoy is stuff like how I met your mother and pretty little liars and is actually really good you all better shut up and listen" and they did and shakespeare became everyone's favorite unit.