Favorite Quote:
"history, despite its wrenching pain, cannot be unlived, but if faced with courage, need not be lived again." -Maya Angelou

Aristotle and Dante Discover the Secrets of the Universe, or, as I referred to it as to my family, Ari and Dante, struck me in an unfamiliar way. I was prepared for the typical LGBTQ story, which I love, but I was ready for something with a twist. I definitely got a twist.

Ari and Dante is a YA book by Benjamin Alire Saenz, surrounding fifteen year-olds Aristotle Mendoza and Dante Quintana, both Mexican-Americans. It is told from Ari's perspective. Ari is a generally quiet and introverted boy with a family past not much to his liking. He meets Dante at a swimming pool, where Dante immediately offers to teach him how to swim. The relationship evolves from an aquaintance to friends, and further. Dante is an outgoing and confident boy with a love of reading and an extensive vocabulary. The two could not be more different, but a friendship is made, and stories are told. The two connect in a very relatable way, and a twist early in the book compromises everything they have together. They come to recognize themselves in each other, better late than never. It is a great read!

I went to the library looking for two specific books, which they didn't have at the time. So I was browsing the YA section, and happened to come across Ari and Dante. I had heard of it before, and decided to start reading it. I also got another book, which I will be doing a review on shortly. I saved A & D for the beach trip that I would go on in two days. I started reading it in the car. Every time I set a place where I would stop and go to sleep, I found I had already read past it. I could not put it down. I was halfway through with the book by the end of the first hour of the car ride, and then forced myself to stop. I do, however, have a few complaints about the book.

First, I didn't like that by the end of the first part, I hardly knew either of them. I understood the logistics of their budding relationship, but I didn't understand the attraction. Not enough of Ari's thought process was revealed to me. I also wish I could have read a little bit from Dante's perspective.

Second, Dante came out of the closet without any warning. There were hardly any signs of his affection for Aristotle. All I could see was a friendship- a close one, at that, but nothing romantic. It was just a little abrupt for me.

Third, and last, Ari's coming out was too much for me. All throughout the book until the very end, Ari has hesitation for even the close friendship that Dante proposed from the begininning. And then, all of a sudden, he realizes he loves him. The romance part seemed to me like it was all plot, no inner thought. Like it just happened with no reasoning.

I enjoyed this book a lot, even if there were those three minor annoyances. It was not the typical LGBTQ book, definitely. It grabbed you by the wrist and led you through a roller coaster ride of emotion, and the subplots left your mouth gaping at how they tied in with the main plot so well.

I would recommend this book to anyone who is attempting to recognize themselves between pages. There is minor violence, a litte bit of language, but other than that, it is a great book. I would say a mature 12 years and up. 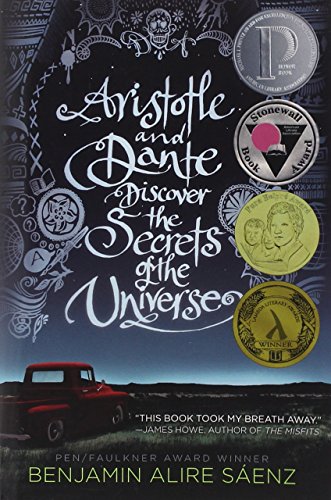