Favorite Quote:
"I wanted to lie down with those words and rise up speaking a new language"

For over a decade, the United States has been waging a “war on terror,” pursuing anything and anyone related to the terrorist crusade. In some cases, throughout this process, the guiltless have been taking the fall and are being punished, including Mohamedou Ould Slahi, a prisoner at Guantanamo Bay.
In his autobiographical account, Guantanamo Diary, Slahi reveals the unwarranted punishments he has been forced to endure. However, many of those revelations were censored by the government before the book was published. Page after page is lined with black blocks in order to expurgate information that may pose a threat to national security. Some sections of the novel are nothing but these ominous black bars.
This memoir will shake you to your bones as you read about the dehumanizing world the United States has created at Guantanamo Bay. From placing prisoners in freezing rooms overnight to withholding meals for days at a time, no form of intimidation has been left out. Some brutal interrogations even last up to twenty hours at a time, and Slahi writes that sometimes, those who went to be interrogated never returned.
As I write this review, Slahi remains in this prison without even knowing why he is being held there. He has not yet been charged with a crime, even after years of torture. This book is more than just a window into our government’s dirty secrets; it’s a call to action for basic human rights. 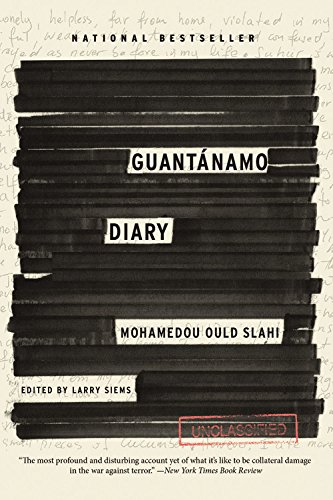