Black Boy (American Hunger) is not my usual reading fodder. I tend more towards fiction, towards worlds of pure imagination and fantasy. Every once in a while, however, I come across a book that reminds me of the raw power a nonfiction narrative can hold. This is one of those books.

Black Boy (American Hunger) is the autobiography of Richard Wright, a black man born in 1908 in Mississippi. In lush, detailed writing, Wright chronicles the first twenty-eight years of his life, from his struggles in the Jim-Crow-riddled South, to his eventual move and continued struggles farther north, where life as a black man was not as improved as he had hoped.

Though Wright employs beautiful language, many of the experiences he describes are anything but. Jarring descriptions of racial prejudice pepper his life story. In one memorable scene, Wright's family reels from the sudden murder of his Uncle Hoskins by whites looking to seize his prosperous liquor business. In another, Wright is threatened and physically attacked by two white men working in the optical store where Wright had recently begun training. This unsettles him so much that he has to abandon the job.

The hardships Wright endures are not all of a racial nature. His mother remains ill throughout most of his life, his family pressures him to agree with their religious practices, he finds himself isolated from children his age due to his frequent moves and intellectual tendencies, and his family is desperately poor. The concept of hunger— physical, emotional and intellectual— is brought up again and again and becomes a unifying thread throughout the book.

If you ever find yourself in search of an autobiography, whether for school or for your own pleasure, you could certainly do much worse than Black Boy (American Hunger). 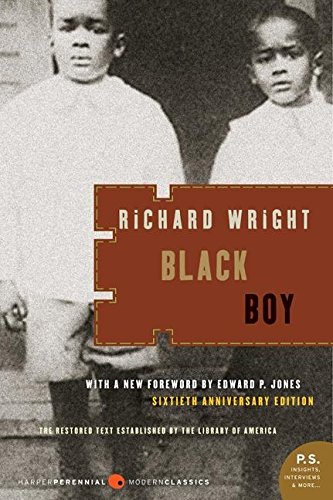