Favorite Quote:
Pornography is the Devil's Iconography-Death to the World

“My intention, in telling this story from the very beginning, is to show the full cycle of alcohol abuse.  I did not begin by drinking from steep glasses, viscous concoctions of rum, gin, vodka, and triple sec, and I did not start off blacking out or vomiting blood.  Like most abiding behaviors, my drinking was an evolution that became desperate over time:  I found alcohol during my formative years.  I warmed to it instantly.  Like a childhood friend, it aged with me,” says Koren Zailckas in her harrowing memoir of a drunken girlhood.  She goes on to say that her alcohol abuse, though dangerous, was not unprecedented.  Hers were ordinary experiences among girls and women in both the United States and abroad.  She was not an alcoholic; she abused alcohol.  As she puts it in her book Smashed, “still, I am not an alcoholic.  As far as I can tell, I have no family history of alcoholism.  I am not physically addicted to drinking, and I don't have the genetically based reaction to alcohol that addiction counselors call 'a disease.'  In the nine years that I drank, I never hid bottles or drank alone, and I never spent a night in a holding cell awaiting DUI charges.  Today, one glass of wine would not propel me into the type of bender where I'd wind up drinking whole bottles.  While I have been to AA meetings, I don't go to them.


"I am a girl who abused alcohol, meaning I drank for the explicit purpose of getting drunk, getting brave, or medicating my moods.  In college, that abuse often took the form of binge drinking, which for women means drinking four or more drinks in a row at least once during a span of two weeks.  But frequently, before college and during, more time would pass between rounds, and two or three drinks could get me wholly obliterated.”


This is a book that does not flinch away from the terrifying and horrible prospect of alcohol abuse.  It is told by a woman who, for the nine years from the age of fourteen to the age of twenty-three, abused alcohol to the extent that, by the time she was sixteen, she had her stomache pumped, and in college she was poisening herself.  As she hits the subject of alcohol abuse straight on, she uses it to analyze her emotions, as well as others.  She does not hold back any details, and is not shy about expressing her emotions, her countless lies and excuses she made, and how much she hurt everyone around her, as well as herself in the process.  She accepts the fact that, as she started drinking at the age of fourteen, she has stayed that age mentally, not fully maturing to the extent that she should have.  She writes,  “As a twenty-three-year-old, I am mistaken daily for nineteen (seventeen if my hair is pulled into a ponytail and fifteen if I'm wearing converse sneakers).  Too many days, people make me aware of my own childishness.  I am aware that the clerk behind the counter calls me miss instead of ma'am, telemarketers still ask to speak to my parents, and after years of financial independence, every handyman who turns up at my apartment still makes snide remarkes about 'Daddy paying my rent.'  I am aware that the fourteen-year-old girl I tutor in English is a head taller than I am; and while I craft arguments that burn my cheeks because I never spit them out, she extends her opinions even when they aren't complete.”


Koren also uses Smashed as a way to compare her own opinions on drinking with the research that she has made.  One of the things she focuses on the most is the misconception about girls and drinking.  She says, 'I also wrote this book to quash the misconceptions about girls and drinking: that girls who abuse alcohol are either masculine, sloppy, sexually available, or all of the above, that girls are drinking more and more and more often in an effort to compete with men, and that alcohol abuse is a life-stage behavior, a youthful excess that is not as damaging as other drugs...On the contrary, most every girl I've known drank as an expresson of her unhappiness.  I too drank in no small part because I felt shamed, self-concious, and small.'

This sad and beautiful memoir is an essential eye-opening read for anyone who is going through a pattern of dangerous drinking, knows someone who is, who has been drinking underage, or being told to by friends or family.  Then you, like Koren, can finally ask yourself, where am I? 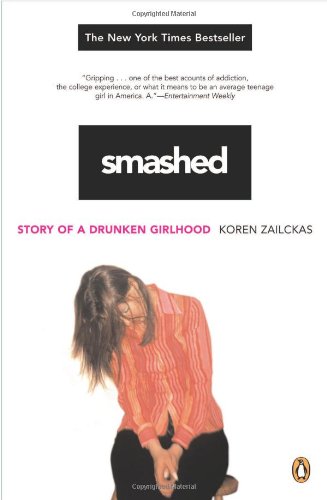