It's All Greek to Me by Charlotte Higgins | Teen Ink

It's All Greek to Me by Charlotte Higgins

Ancient Greece is not limited to school textbooks. It demands to be relived, through Western literature’s most avid predecessors, philosophies, and heroes that are larger than life. And yet it remains elusive, in a world impossibly distant from our own. Charlotte Higgins’ witty, storytelling prose brings that world to life in It’s All Greek to Me.

For those unfamiliar with the ancient Greece’s greatest achievements and daily life, this is the perfect book to begin. When I picked it up, I wanted to dip a toe into the waters of ancient Greece, curious at first, and not quite sure where to start. Fortunately for myself, Higgins writes with a voice that reads like a story, and we stroll through the ages of Homer and Hesiod, down to Aristotle in the late centuries BC. The book is organized by topics; we swerve through the thoughts of thinkers in the ancient world, into concepts as broad as they are fascinating. There’s mortality in ancient Greece; women as the “silent majority”; waging war against barbarians; the emergence of science under the seat of the gods; and love, through the lenses of literary geniuses Homer, Sappho, and Plato. There’s also plenty of juicy little tangents, like what unsuspecting words in the English language we owe the Greeks.

Higgins presents no watery analysis, either; she deftly spins together history, myth, and tales into one fantastic story. There’s the overarching theme of “the greats”; gods, men, and monsters alike. Higgins explains “Why a life without Homer is a life half-lived,” delving into the heart of what we recognize as the fountainhead of Western literature today. There’s Homer’s The Iliad and The Odyssey, the former a tale of war, love, and loss during the Trojan War, the latter king Odysseus’ journey back home. Those who love the movies Troy starring Brad Pitt and 300, a jaw-dropping rendition of 300 Spartans’ doomed defense, will find plenty more to enjoy. There’s the themes of power, glory, tragic young death, laughter, adventure, empathy, and family throughout the book. It’s the extraordinary humanity that Higgins addresses, and the Greeks’ analysis of it, which makes the novel so magnetic--possessed even by the Greek gods, anthropomorphic deities who squabble and gamble plenty themselves.

The book also carries fantastic relevance today, where unity is sorely lacking on political and cultural fronts across the world. And although it may appear ancient Greece is more accessible than ever, Higgins reminds us somewhat mysteriously that “We will never completely grasp ancient Greece. An enormous wealth of literature, art, architecture, and other artifacts have survived, but for every survival, there are a thousand losses...” Still, we see clearly the roots of ancient Greek culture in our own: the Hippocratic Oath, the beginnings of democracy, even a comprehensive list of the Greek gods and their backstories for Percy Jackson fans. Higgins supplies us with a beefy new reading list, which range from the works of Homer, to Herodotus, accredited “father of history,” to the poet Sappho, and endless other Greek magnas whom we still study today. Or, rather, the storytellers who remind us the human story is constantly being told. It’s all Greek to us, too. 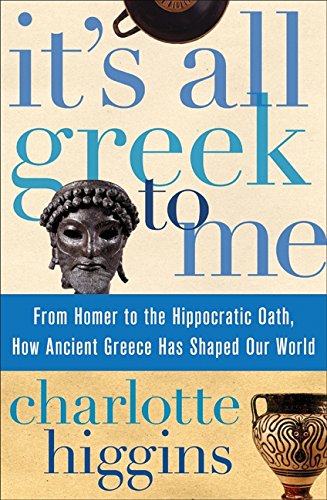