The Glass Castle by Jeannette Walls

The glass castle was their dream. Jeannette Walls illuminates that memory like sunlight through glass, as she writes of her childhood and dysfunctional, dreaming family. That includes her hardworking brother Brian, her talented sister Lori, her little dollface sister Maureen; and her parents, her artsy, brilliant mother who couldn’t accept the responsibility of supporting a family, and her father, who filled his children’s minds with a running imagination. At night, his drinking and gambling left the Walls family in a “three shack home” in Welch, no indoor plumbing, hardly any food, and over time, his four children are left to fend for themselves.

I recently came across the quote “Save a little room in your heart for the unimaginable.” Walls’ memoir seems to fit the bill: in one light, it’s incredible, given the intricate detail and heart Walls pours into its pages. Even if the Wallses lived in another time, embedded in the twentieth century, Jeannette Walls’ life is something else. First seen in a van driving across the desert, and hopping across broken down homes, Walls strikes a balance between the wondrously free and truly desperate.

Her mother Rose Mary Walls is vibrantly captured in all her quirks, the ultimate counteract to her father, a swaggering charmant with the ability to rescue or tank her family. Money and food seem to slip right through their fingers, in a relaxed sort of way, and both personalities are captured down to the word. They’re major players as Walls and her siblings struggle to literally survive; to not freeze to death in the winter, or starve to death year round.

And with the middle-class luxuries many of us take for granted, Walls’ situation seems downright insane. She goes through everything imaginable. And yet Walls never seems to make it to self-pity. It’s a memoir, tried, and true, and only the truth. The book’s inside book simply reads, “‘On the eighth day, when God was handing out whining privileges, he came upon Jeannette Walls and said, ‘For you, and unlimited lifetime supply.’ Apparently, Walls declined His kind offer,” according to Chicago Tribune. Walls has the natural ability to tell a story with a matter-of-fact tone, a reporter on the streets. Still, it’s filled with life, and surprisingly, light. Their glass castle might be built from ash and stone, but it’s beautiful to look inside. 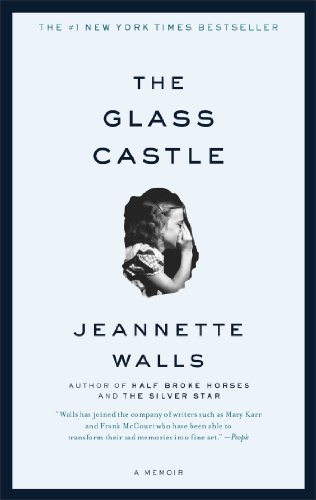