Neil Gaiman: ah, how those British authors love to flit about with intertwining stories and mysteries. Of course, in the end they all come together to explain one “important” subsection of the book that at one single moment may feel absolutely vital to the reader, whatever it may be. Gaiman is a Brit author that likes to go to simple levels of this extravagant scheme. He has intertwiningly worked between fiction and the screen: New York Times best-selling author of the graphic novel The Sandman, he wrote the English translation for the Studio Ghibli animated epic Princess Mononoke, has written stories and screenplays, one of them the 2007 adaptation of Beowulf, one of his novels, Stardust, was adapted in 2007 for the screen, featuring Michelle Pfeiffer, Claire Daines, and Robert de Niro, and he most recently won the Newberry Medal award.
Coraline is as strange as most average British writers' fantasy fiction may be, from J.R.R. Tolkein to Diana Wynne Jones; it goes to extravagant angles and measures on the two genres that ought to be kept apart as much as possible for what is considered “sanitary picture,” and those two genres are Family and Horror. At the beginning, you'd think it more of another one of Tim Burton's dreary movies that display horrific satires on the modern average social values (not too far away; the director Henry Selick and Burton created The Nightmare Before Christmas together). Coraline is a teenage adolescent moving into an old house with her stiff-back-and-neck parents. Everything is gloomy, the trees, as always, symbolize the nature and feel of the place. Being the restless explorer as she is, she finds a nighttime portal to an opposite world where there are alter egos of everyone, the cinematography is rich, splendid, and colorful, word phrases translate to devices (the Gravy Train creates a small Family joy that the children are meant to relish in), our young heroine gets anything she wants, and everyone has buttons for eyes (gasp!). Coraline soon finds that they are a requirement for her staying in this joyful world, and soon finds that they are not meant as an option. Our heroine's options begin to thin out, and the Horror element begins to kick in as the movie comes to its action-element climaxes.
As the title suggests, the movie is not your normal average movie (Coraline is not a name) and stretches itself to the limit with the joys and then the thrills. We are pulled in with our heroine as she travels back and forth from real to Wonka-like world (let us think back to Mr. Burton's gothic remake), swaying back and forth from boredom to fun, stolidity to action, and happiness to terror. We witness the dramatic changes that take place, and as any good movie allows, are able to peel away at the inner core of each character and find the balance in the real world of the individuality of everyone and the potential for the bright side to be considered over the constant charade of happiness that aims for its selfish goals with just as bad of a dark side.
The creativity for this film is excellent, or at least a triumph for a non-Pixar animated feature. The music is well-expressive of each scene, my favorite one being a bumbling melody of what I would guess to be string and percussion instruments with a girl singing gibberish or Hungarian, so I'm told. The cinematography is obvious, with the same nature as many movies about multi-worlds, such as Guillermo del Toro's Pan's Labyrinth, but nevertheless successful. The animation of the real-life characters is always creative, funny, and well-embodying of the stereotype of some 1940's relic, while that of the “opposites” are extravagant, gracious, and also deteriorating as the film goes on and the grip on heroine Coraline tries to tighten. Sequences that go on in this opposite dimension are extravagant and shoot out to the audience (perhaps literally as well, in 3-D), with little mice circuses with cotton candy cannons and trapeze operas that eventually turn into tragically shriveled up and warped characters under manipulation.
And while the ‘normal' world is stuck in its dreary tones and stolid position, it is in the children's movie ending that shows that it is better to try and elevate and brighten up the prospects of those and things around rather than taking candy from strangers. At the end, the movie simply tells us, Don't go off looking for things in dark outskirts when there is already so much chance for yourself here to open your heart unto. Selick and Gaiman make their point, and in the process scar us with the incredible twist of the arm and brain coming from their far-reaching diversity of candy-colored, warped, and slightly satiric “family horror.” 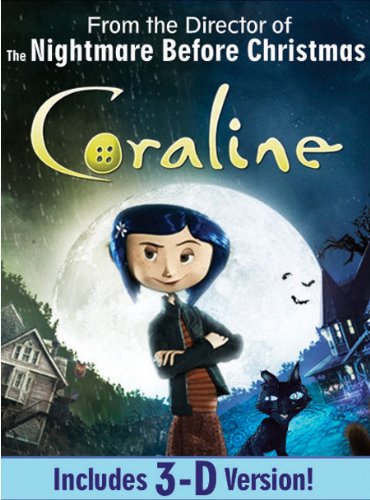