As parapsychologists, Peter Venkman, Ray Stanz, and Egon Spengler's job is to chase down evidence of the existence of ghosts. But just when they finally find solid proof, they are fired.

Not guys to mope, they hatch a plan to really get evidence: they will catch ghosts. As the only ones in the business, the Ghostbusters have immediate success. But little do they know that a bigger conflict is brewing. A psychokinetically charged high-rise suddenly appears in the middle of the Big Apple. The spiritual realm is about to open its doors to New York and the world. Only the courageous Ghostbusters can stop this impending doom.

If you think this sounds like next summer's blockbuster, you're a couple of decades off. This movie was a hit in 1984, and it's my all-time favorite.

“Ghostbusters” is a sci-fi comedy, and it can easily hold its own in either genre. Its comedic success is due, in no small part, to the all-star cast. Bill Murray, Dan Aykroyd, Harold Ramis, and Ernie Hudson all fight for the spotlight as the Ghostbusters team. Murray steals the show as the happy-go-lucky Dr. Peter Venkman, but the others nail their roles. Annie Potts, Rick Moranis, Sigourney Weaver, and William Atherton round out the cast.

The infectious humor is complemented by some fantastic special effects that are still cool today. The Ghostbusters use Proton Packs, specially designed ghost-wrangling devices that throw out a devastating red beam of energy.

The finale is an unforgettable cinematic moment. But trust me, the Ghostbusters need every last gizmo to battle the specters of New York. They face everything from a Class 5 full-roaming vapor to a tasty campfire treat gone awry. All the spooks have unique personalities; for example, Slimer is a gluttonous, mischievous character. I could go on, but I'd spoil the surprises.

The film combines action, sci-fi, memorable quotes, and some of the best comedic talents on screen. “Ghostbusters” is a true classic by all accounts. So next time you can't decide what to rent, just ask, “Who ya gonna call?” 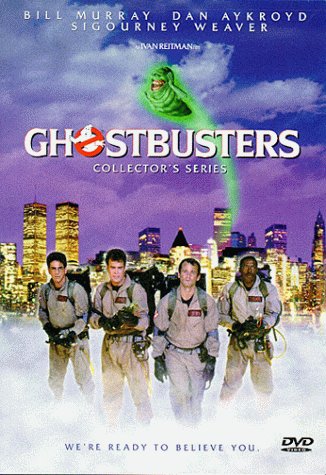 
Buy from Amazon Available on iTunes
The author's comments:
My all-time favorite film. And that's all she wrote.
Post a comment
Submit your own

Favorite Quote:
Oh my unnamed deity!
Think off-center
Not only do I not know what's going on but I wouldn't know what to do if I did.
I love to laugh

View profile
yeah i met him at a film festival of puppet movies. he is a friend of a guy who i am writing a play with, and he (steve johnson) played one of his short films and after the film played he had a big Q&A, it's not everybody that you meet the special effects head of one of the most successful films of all time. he was pretty nice. you could check out his youtube channel stevejohnsonfx
JeremyHerbert PLATINUM said...
on Aug. 12 2010 at 8:09 pm
JeremyHerbert PLATINUM, Fairview Park, Ohio
21 articles 0 photos 54 comments
View profile
Steve Johnson? That's amazing!
zman1 PLATINUM said...
on Aug. 12 2010 at 12:02 pm
zman1 PLATINUM, Bethesda, Maryland
45 articles 0 photos 31 comments