A man with a vision of his own reality.

I recently have seen the movie Ed Wood, directed by Mr.Burton.

This movie reminds me of the first glance in which people generally perceive people/things. If you first watch this movie you may become very frustrated with its lack of quality in style, acting and editing. Maybe the plot can be confusing from time to time, and sure, the portrayals of some characters are campy to say the least, but that's the only way to truly respect Mr.Edward D. Wood Jr. By giving him what he gave us. The most incredibly, incontrovertibly, low-quality films of the Hollywood rat race.

What has set this film mogul apart however, was his absurd plot-lines. Plots and themes in which Tim Burton's film portrayed evenly, though in these modern times, themes such as Ed Wood's are becoming less controversial, but, nevertheless, still screwy. Overall, in my personal opinion, the movie was reasonably edited for respectable taste, but the script is what made it so incising. Dearly witty and adversary, this script fell in line with the mood and editing, but still making the audience perceive it as an A-list film (or it could have been Martin Landau's Oscar-claiming performance) . So, now Ed Wood can rest in worry knowing that his name has been chiseled into something actually worth your investment.

(This movie also captured a world. A world where many people refuse to go to in their minds, or only wish they could understand. I don't know if Ed Wood makes these worlds clear or just more confusing, but he certainly makes his mind a part of the plot.) 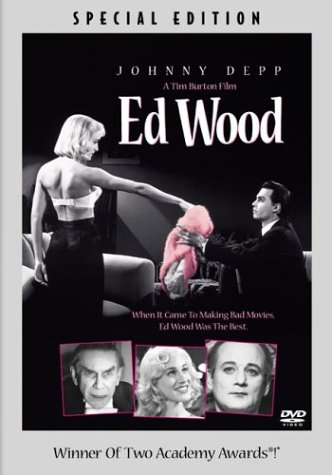