Favorite Quote:
Continuous effort - not strength or intelligence - is the key to unlocking our potential.

Beautiful Dreamers is a 1991 drama, directed by John Kent Harrison. The film is set in the Victorian era, where mental patients were treated inhumanely. Dr. Maurice Bucke, a super intendient
at the London Asylum of the Insane, meets American poet Walt Whitman. Walt has a mentally incompetent brother of his own. Together the men try to change to treatment of the mentally insane in asylums. They disagree with the doctors idea's of medical treatments, and believe that love would be a better remedy for the patients. The film is cinematic genius, for it conveys true emotion, and a different sort of innovation, and storey telling. The film shows how, “The world changes some people, and some people change the world.”

Each second of the film exudes a diverse rang of emotions. Only the immortal will watch the film and not shed a tear. There are parts when you see Mr. Whitman caring for his brother, and you're sobbing tears of joy. The are also scenes where you view the patients, being held is cages like animals, or being beaten, that you become frustrated, livid, and feel the pain of the patients. Not only is the visual aspect of the movie emotional, but the director grasps the art of background music to move the view to an emotional state. Instrumental accompaniments deepen your feeling of joy or sorrow. The musical aspect makes each frame become more effective. In some opinions the purpose of moving pictures is to move someone to another emotional state, and in that aspect the move is a success.

Innovation refers to a new way of doing something. Normally innovators are drawn to new inventions, scientific practices, and complex systems. However both Dr. Bucke and Mr. Whitmen, were innovators without the gadgets and gizmos. Whitman is eccentric, as he views the world in a different manner then everyone else. He is very outspoken and hold philosophies on life and relationships. It is that he wants to change the way the patients are not only treated, but viewed in society that makes him a respectable innovator. Bucke is a superintendent at the asylum and believes that to change the thoughts of the insane, you must first appeal to their feelings, therefore altering their state of mind. You watch as he grows into a dynamic character. The movie starts portraying him as dull and once he meets Walt he become extraordinary, and opinionated.

In my opinion the best plots are the ones based upon a true story. What could be more horrible, or triumphant then what life throws at us. And on the other hand what could be more inspiring, a premise fabricated by a stuffy movie director, or a plot formed from life's natural pattern. What makes this movie a joy to watch is that it shows people who were under going atrocious, yet real situations . For example Mr. Bucke was an actual psychiatrist, and he did have a friendship with Mr. Witeman. They met during 1877 (which is the year the movie suggests) The type of relationship between Witman and Bucke is historically correct. Bucke said that Witman, “set him upon a higher plane of existence.” Therefore the relationship between Witman and Bucke was historically accurate according to the movie.

After watching the movie, “Beautiful Dreamers,” I learned that true human emotions can be displayed in film. Beautiful Dreamers utilizes visuals and instrumental background music to grasp the viewers heart. It has a superb and realistic plot where reality and cinematography diverge into one. It also displays true innovation, which is both inspiring and heart warming. All together the film is art that flashes before your eyes. 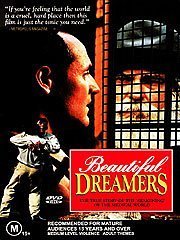