Back to the Future - Part 1

So goes the intriguing tagline of one of the greatest movies to come out of the 1980’s…and 1950’s.
Let’s face it: almost everyone has seen this movie. If you haven’t you need to. That being said, let’s dive in.

The movie follows Marty McFly, an average, loud-music-playing teenager in Hill Valley, California, a town only known for a lightning strike thirty years earlier. He’s picked on by his own principal and sees his family, quite rightly, as a bunch of wusses and missed opportunities. His father’s still bossed around by his old high school bully. Life is rather pitiful for poor Marty, outside of his girlfriend, Jennifer, and his good friend, Doctor Emmett Brown.

The Doc is always testing new and usually failure-wrought technologies with Marty’s help. This time, though, the Doc’s stumbled upon something brilliant, if not world-changing: a time machine. And the half-crazy scientist wants Marty to see its maiden voyage.

Unfortunately, the Doc needed plutonium to get the flux capacitor running. And, as the Doc himself admits (30 years before), plutonium isn’t exactly easy to come by. He ends up trading a fake bomb to some Libyan nationalists in exchange for a case of the volatile substance. The only problem is that they’ve figured out the con, and came back just in time for the first test.
They gun down Doc Brown and almost end Marty as well, but he manages to get in the time machine, built stylishly off a Delorean, and accidentally rockets himself thirty years into the past.

Safely, if confusedly, in 1955, he finds himself in a foreign world. It’s still Hill Valley, and it’s still California, but he’s never imagined his hometown could be so different, so… clean.

After spending just a day in the past, he stumbles upon his father and prevents him from meeting his mother. But what’s worse is that he’s taken his father’s place as the object of his mother’s affection. If he’s not careful, he could wind up his own father.
There’s only one man that could straighten this out: Doc Brown, 1950’s edition. The Doc doesn’t believe this “Future Boy” at first, but after he sees the Delorean and Marty’s video tape of the experiment in 1985, he agrees to help.

Unfortunately, the only force capable of producing the mind-boggling (and completely fictional) 1.21 jigawatts of electricity to send the machine through time is a bolt of lightning, since plutonium is even harder to come by in the 50’s. Luckily, they know exactly when the famous lightning bolt is going to strike: one week from that day. So Marty simply has to avoid contact with his parents until then.

Too late. Posing as Calvin Klein (since, as Marty’s mother noted, that’s the name on his underwear), Marty has to restore history and make sure he still exists when he gets back, if he makes it at all.

It sounds like a confusing mess of science fiction nonsense, but this movie is so much more.
It’s a perfect mix of comedy, character, special effects, action, romance, and suspense. Very much like the Delorean, this movie caught a bolt of lightning, a combination too perfect to recreate.

And I’d recommend it to anyone.
Christopher Lloyd and Michael J. Fox give career-defining performances as the Doc and Marty. The supporting cast, from Lea Thompson to Tom Wilson, are just as good.

It’s almost an educational film, dare I say it. Not because you’ll learn the basics of time travel (they leave that for Part 2), but it’s a very picturesque look back at the 1950’s, and since the movie just turned 25, the 1980’s. To today’s generation, both eras seem so different… better.

And one of the key ingredients that make the movie so authentic is the soundtrack. It was on the charts for a good while when it was released and it’s not hard to tell why. Featuring the classic songs of Huey Lewis and the News, along with select 1950’s hits like “Earth Angel” and “Johnny B. Goode,” it’s just as timeless as the movie. On a side note, Lewis’ opening and closing songs (“The Power of Love” and “Back in Time”, respectively) are the best possible bookends to the movie. The orchestral score by Alan Silvestri is just as memorable, if not moreso.

But at its core is one of the tightest scripts you’ll ever read. Everything in this movie is significant. References at the beginning are important at the end. A pamphlet from the future is the only reason Marty can leave the past. The dialogue is quick, smart, and timed perfectly for comedy. It doesn’t always go for laughs, but when it does, it hits.

You really can’t fault Robert Zemeckis’ directing at all, considering nearly every shot in this movie is famous, or at least memorable to someone who watches it.

So why watch it? Along with Ghostbusters, I’d say that this movie really sums up 1980’s cinema, or at least comedy. It’s flashy, it’s funny, it’s got heart, it’s got a story to tell, and it’s plain fun. A vastly entertaining movie, to put it simply.

Ask almost anyone, and they’ll probably have seen this movie. It makes quite a few peoples’ lists of best films ever made. Personally, it’s easily in the top five.

You probably noticed that I mentioned a Part 2. You see, Back to the Future is a trilogy of surprisingly great movies, even the sequels. And each installment takes a wildly different turn through time. But that’s for another review.

For now, take a spin in the Delorean, hit 88 miles-per-hour, and check out one of the best movies of all time. 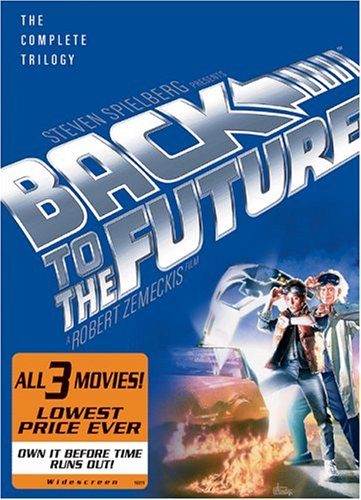 
Buy from Amazon Available on iTunes
The author's comments:
The start of one of the greatest sci-fi trilogies of all time, and a fantastic movie on its own.
Post a comment
Submit your own