Back to the Future Part 2 | Teen Ink

Back to the Future Part 2

“Getting back was only the beginning…”

Marty, fresh from the past and ready to live in 1985 like he used to, is interrupted as Doc Brown crashes the Delorean into his driveway, just returned from 2015.
He needs Marty’s help to save the young teen’s kids. What starts out as a simple mission to make sure Marty, Jr. doesn’t go to jail entangles itself with old Biff Tannen, Marty’s father’s former bully.

The old man sees the Delorean disappear from 1985, and seeing it arrive in 2015 sparks his memory, and a devious plan. Using a Sports Almanac from 2015 that includes the winning teams of every sporting event in the past century, he steals the Delorean and gives the book to his younger self, back in 1955, so he can become richer than he ever dreamed.
Unfortunately, this leaves Marty and Doc in an alternate 1985, one that stems from 1955 Biff’s “lucky” streak at the track. In this timeline, George McFly is dead and Lorraine McFly is married to Biff Tannen.

So the intrepid duo return to 1955 to stop Biff from ever using the almanac, all the while avoiding themselves from the first movie. But they’ve only got a few days to put things right and make sure their first trip to the past remains intact, or they could erase themselves completely.
Following up one of the best movies of the 1980’s is no mean feat. Ghostbusters 2 pulled it off rather half-heartedly, the Indiana Jones series had its ups and downs, but the Back to the Future series is up for debate.
The original had humor, heart, special effects, and a solid plot. The screenwriters even admitted they never wanted to do a sequel, even with the first movie’s cliffhanger ending. Five years later, they spun a ridiculously convoluted follow-up, to interesting result.

How much you enjoy the second installment hinges directly on how much you enjoyed the time travel element of the first. If you loved the idea of a car traveling through time and trying to restore history, you’ll eat this movie up. If you only enjoyed the first for its characters and charming warmth, you may be put off.

It’s a whole lot darker than the first; no way around that. Ultimately, greed is what drives the villain (and I suppose the fact that there is a distinct villain outside of time itself is a change), and he does some rather questionable things because of it. Granted, they’re only mentioned off-handedly, but Biff’s a much more evil character in this outing. The innocence of 1955 is replaced with the crass consumerism of 2015 (a startlingly accurate prediction), the hellish chaos of alternate 1985, and a satisfying ending romp through 1955, a welcome change of pace.

That being said, this is the only edition of the trilogy that actually goes to the future. And what a future it is. Flying cars, hologram-based advertising, hover boards, and questionable fashion sense are in order and it makes for a really entertaining opening. Alternate 1985, though, is kind of depressing. It’s a bleak view of a Hill Valley that easily could’ve been, roving bikers and drive-bys included. But the end, which intertwines directly through the first film, is worth the run time alone.

And that brings me to another point. This is a strange trilogy in the way it is related. The first stands on its own, but the second really needs to be watched just after seeing the original. That way, you’ll remember all the references and close calls between them. But Part 3, as we’ll eventually see, isn’t really related to the original that much, but needs Part 2 to lead into it.
If you watch Part 2 on its own without a good knowledge of at least the first part, then it’ll be an all-too confusing time. Even if you have seen Part 1 before this, it’s still a confusing time. Too many times to count I’ve spent the two-odd hours of Part 2 debating the time travel mechanics with friends. Some might say the movie jumps from one era to another too quickly, and it does, but I’d venture that it’s not a bad thing.

The first movie was only really suspenseful in the last half hour, but this entire movie is moving at a raging pace.

The actors are all still in top form, especially Tom Wilson as Biff, who really gets this movie to shine. The soundtrack has almost no pop songs like the original, two exceptions being “Beat It” by Michael Jackson and “I Can’t Drive 55” by Bob Seger. But Alan Silvestri’s nearly-identical score to the first fits like a glove.

So how does this movie rate in comparison to Part 1? I’d stake it as slightly lesser than the original.

Since it relies so heavily on your opinion of the first, it doesn’t stand so well by itself. And since it’s one of the few sequels that takes place mainly in its predecessor, it’s important to watch both. The humor’s here, the storyline, this time scrambled to bits, is here, and it’s a fun ride. While not the greatest movie in the trilogy, it’s probably in second place, which isn’t too shabby for a sequel.
Ultimately, it’s not as smooth a trip back in time this go-around, but for the Back to the Future purists and fans of sci-fi mayhem, it’s a must-see.

Back to the Future Part 2 is a worthy successor to the fantastic original film, if a slight step down. When watched together, it’s one of the best two-act powerhouses of sci-fi. If you see the first, then this is the easy second step, and it’s time well wasted. 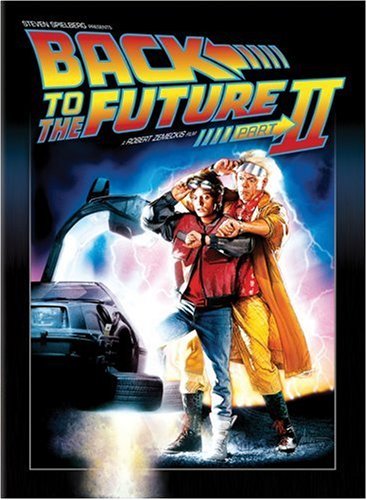 
Buy from Amazon Available on iTunes
The author's comments:
The middle installment of one of the greatest sci-fi trilogies in cinema makes a few missteps, but ultimately does its predecessor justice.
Post a comment
Submit your own