Ivan Reitman’s Ghostbusters opened in theaters all over the world in 1984. And history was made. It broke box office records for the opening week sales, and stayed as the number one grossing movie for five weeks, dropped, and then returned at number one a few weeks later. It was re-released in 1985 and those additional figures made it the most successful comedy of the 1980’s. Critics praised for the comedy, the special effects, and the great performances by everyone involved. To this day it holds a 93% “Fresh” rating on Rotten Tomatoes, which means that percentage of the critics viewed it positively. It’s impressive and stands as a sign of its enduring popularity.

It spawned a still-loved animated series, which itself spawned a long-running series of action figures. Video games, lunch boxes, puzzles, and just about every product you can imagine accompanied the movie’s deafening success and promotion.

Naturally, the idea of a sequel was thrown around. Not by anyone involved with the first film, but by Columbia Pictures, who wanted another record-breaker. Director Ivan Reitman didn’t really care to do another, and neither did co-writer and co-star, Harold Ramis. The other co-writer (and co-star) Dan Aykroyd, however, had written a script around 1985, though he didn’t really pursue it. Largely, they all agreed that the first movie was self-contained; there was no more of the story that needed to be told. And they’re perfectly accurate: the audience has no questions after the end of the film. Bill Murray more than likely didn’t know about the earliest discussions, but no doubt he would’ve declined, and we’ll see why in a moment.

But the group did want to work together again, just on an original project. The more they discussed it, however, the more they agreed that another adventure as the Ghostbusters might be the best option. So during a meeting, they met and discussed the sequel. Well, not quite. They discussed financing for the sequel, which translates to precisely how much money all would be making off the film. This early meeting, where only the paychecks were discussed, sets an ominous tone for the entire production, and a quite accurate one. But I digress…

The script was dark, with some metaphysical implications about Ghostbusters and what they do. In other words, it’s precisely what studios don’t want for their summer blockbuster. Though the cast liked Aykroyd’s draft, the script was reworked and most of the dark bits were neutered. In fact, it’s been suggested that this was in reaction to the action movies that were swarming the cinemaplexes.

Somewhere in the mix, as common lore goes, the special effects crew got their hands on the script and embellished it, adding more digital effects which essentially pulled attention away from the characters, one of the components that everyone loved from the original and something that featured heavily in the new script. The cast and crew enjoyed working together again, none-the-less, and Rick Moranis, Annie Potts, and Sigourney Weaver all signed on for another.

In 1989, Ghostbusters II hit theaters in a blockbuster-heavy year. And it wasn’t the only sequel. Indiana Jones and the Last Crusade, Lethal Weapon 2, and Back to the Future Part II were competing for movie-goers, along with the widely anticipated Batman.

But its first weekend broke records, which proved promising, but that same record was beaten by Batman just a week later. From there, Ghostbusters II made respectable, and studio-pleasing, numbers at the box office. It grossed in total around $80-million less than its predecessor, but in terms of critical reception, there was no comparison. 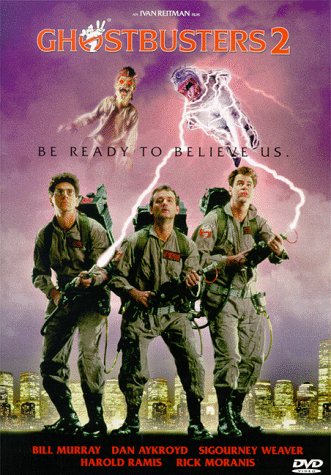 
Buy from Amazon Available on iTunes
The author's comments:
The sequel to my favorite movie of all time is... a strange animal. Here's my take on it.
Post a comment
Submit your own