Raiders of the Lost Ark

“It’s not the years, honey; it’s the mileage”

Raiders of the Lost Ark is a timeless classic. There’s no way to overstate its significance on modern cinema. Raiders, along with Star Wars and Jaws, established the summer blockbuster that we probably take for granted (or lament, depending on your perspective) today. As well as cementing Harrison Ford’s place in the action hero pantheon, the first Indiana Jones adventure to hit theaters revitalized a rather lost art- the action adventure.

But first, a quick history lesson is in order. From the 1930’s to the 1940’s, cinema was really catching on, bouncing back from the Depression and allowing more folks to fill seats each week. And while films were being cranked out (literally) as fast as studios could afford, a hook was needed to bring the audiences back each week. Thus necessitated the serial.

Though they originated in the decade prior (minus sound), serials really became popular in the pre- and early World War II years. These serials acted as episodic adventures or mysteries, stretched out over a month or more. Each week another segment of The Perils of Pauline or Flash Gordon would play at the local Nickelodeon, enticing viewers to see how last week’s climax was resolved. The plot was often pretty simple, just an excuse for high-flying action and square-jawed heroes to box the evil-doers of the week. They relied purely on cliffhangers, unresolved dangers from week to week, to draw back the crowds. And after that week’s adventure was finished, the feature presentation would begin.

They slowly tapered off into the 1950’s, replaced by longer feature films. These serials were seen as anything but high art. And they very much languished into obscurity by the late 1970’s.

Enter George Lucas and Steven Spielberg. The two friends and filmmakers were seeking critical refuge in Hawaii. Lucas wanted some peace from the fallout of his latest picture, Star Wars. Spielberg just sought a break from Close Encounters of the Third Kind. They were discussing possible projects when Spielberg admitted he always wanted to direct a James Bond film. Lucas, equally excited, told his colleague about an idea he had a few years before about an archaeologist named Indiana Smith. The two combined the concepts of an action hero and a globe-trotting archaeologist to create the prototype for Indiana Jones, now one of celluloid’s greatest heroes.

Pre-production began on Raiders before and during the production of The Empire Strikes Back. Screenwriter Lawrence Kasdan, who worked on Empire in the same capacity, cranked out the first draft and collaborated with Lucas and Frank Marshall, the Raiders producer, on the rather far-fetched story. Ultimately, no studio wanted to touch this seemingly archaic and fantastical adventure movie. So to keep costs down, some of the more elaborate sequences the trio had planned were cut, a fair amount of which ended up in the film’s sequel (and prequel), Indiana Jones and the Temple of Doom.

Finally, after the film’s production had been assured, the last blank to be filled was the actor to play Indiana Jones. Some early possibilities seem comical now. Bill Murray, Steve Martin, Tim Matheson. The most promising candidate was Tom Selleck, known primarily for his titular role in the TV series Magnum, P.I. In fact, he was nearly cast, but the show’s producers used his sudden popularity to get another season running. Contractually obligated to the show, he had to decline. This left a gaping hole in the cast. Lucas and Spielberg were going in circles trying to figure out who would do the best with the role when they went to see a screening of Lucas’ just released The Empire Strikes Back. Spielberg took one look at Han Solo and he knew he’d found their man: Harrison Ford.

Lucas had his reservations: he’d worked with Ford three times before, and he wanted to avoid typecasting. More specifically, he wanted to avoid the duo-image of actor and director, like Martin Scorsese and Robert Deniro still exemplify. Never-the-less, Ford was cast and the film quickly entered production.

Released in 1981, Raiders of the Lost Ark opened to critical accolades and did serious box office business. It’s still a top-grossing picture today (with inflation of course). It was nominated for a whopping eight Academy Awards and won a still-impressive four. In short, audiences loved it. And it’s likely that almost all movie-goers even today recognize the name at the very least.

So what’s the film about? An archaeologist/college professor is commissioned by the government to track down the Ark of the Covenant, the same artifact that is said to contain the Ten Commandments of Biblical legend, before Hitler and the Nazi War Machine find it first and use it to channel the very power of God.

The cast is remarkable. Harrison Ford simply becomes Indiana Jones. The character is legendary, and this is where it all starts. Jones is rugged. He’s quick-with-a-comeback, but quicker-with-a-bullwhip. A truly great character, if clichéd by the comparison of knock-offs in the years since. Karen Allen as Marion Ravenwood also gives a fantastic performance, and stands out as the best female lead in the Jones series. Paul Freeman proves a convincingly sinister yet charming foil to Jones in René Belloq. John Rhys-Davies provides some comic relief as Sallah, “the best digger in Cairo.” But behind the comedy, he’s a very capable partner to Jones. Denholm Elliott, last but in no way least, brings his obvious talents to Marcus Brody, an authority figure and colleague of Dr. Jones.

The script is tight and sharp, largely grounded in reality and gritty at times. The concept of the film might be somewhat fantastical, but the action sequences and the dialogue are both perfectly believable, something that would be less prominent in the sequels. What’s really key here is that the film never asks the audience to overlook gaps in logic; there simply aren’t any. It’s intelligent, it doesn’t talk down to the audience, and at the same time it’s entertaining regardless of how much you read into it. Jones in particular is brilliantly written. The vulnerable action hero has been diluted in recent years, as it seems modern audiences accept nothing outside it. But Jones is remarkably human, getting beaten, shot, nearly stabbed, etc. through the course of the runtime. It never seems to slow him down, but you can tell he knows he doesn’t have time to take a break. Most interestingly, in terms of plot, he’s rather ineffectual. I won’t spoil the ending, but it’s none of the heroics or gunplay that save the day; it’s knowledge. A rather subtle lesson that any action hero could stand to learn.

Spielberg is still in his early period, and his lean style works well. Every shot is immaculately composed and totally necessary; no waste at all. However, he has admitted that part of the reason for the streamlined shooting style is a simple low-budget; they didn’t have the time, money or resources to slow down or get more than a handful of takes for a given angle. But it effectively harkens back to the nearly-no-budget serials Raiders lovingly recreates.

The editing cracks along at a brisk pace, never getting in the way of action, but merely showcasing it. Raiders is a perfect example to contrast the Shakicam action sequences of most modern films; here, the steady camera and the slower than what most critics call MTV-style editing show every punch and every gunshot cleanly to the audience. The speed’s still there, but the audience sees every move, making it much more compelling than the alternative.

John Williams, who worked on every Spielberg film (aside from Duel, but that was first-and-foremost a made-for-television project), writes a truly memorable collection of cues, playing off the almost pompous sound of the Republic serials. “The Raiders March,” now affectionately known as “The Indiana Jones Theme.” Some other significant motifs include “The Desert Chase” and “Marion’s Theme.” It’s all perfectly in sync with the simultaneously overblown, underplayed tone of the movie.

Every aspect of its production could be saluted, but I’d like to really highlight Douglas Slocombe’s cinematography. With beginnings in World War II propaganda films, Slocombe had been in the business for a while before Raiders. Perhaps that experience and the era in which he’d gained such experience attributed to the distinct look of the film, which subsequently matches that of Temple and Last Crusade. I’d best describe it as high-contrast, subdued Technicolor. There’s something truly unique about the value in this film. It’s a far cry from the blue-orange, everybody’s-tan color correct of today, and it makes the movie that much more timeless. Every color is rich, and at the same time a little darkened and rather gritty. It’s a joy to look at, especially in the age of HD TV’s.

In short, Raiders laid the ground work for arguably every action-adventure since. It’s still hailed as one of the greatest films of all time, at least one of the best screen adventures. It’s one of the most widely known movies of all time, and the character has transcended into the pantheon of action heroes. Raiders of the Lost Ark is one of the most flawless pieces of escapism you can possibly hope to watch. 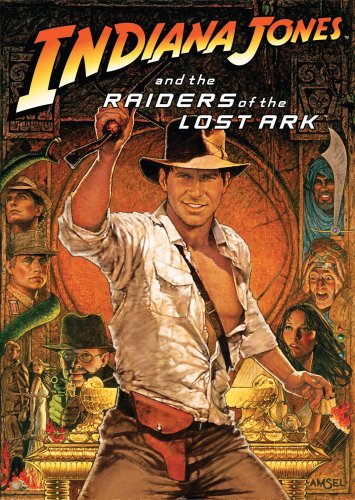 
Buy from Amazon Available on iTunes
The author's comments:
Raiders of the Lost Ark is possibly my favorite film of all time. I finally decided to break down just what makes it work so impeccably well.
Post a comment
Submit your own