So says Richard Chance, a secret service agent with a chip on his shoulder. You see, Richard lost his long-time partner to Rick Masters, a world-class counterfeiter and would-be painter. His new partner is John Vukovich, a fresh agent with cop in his genes. The film follows the pair as they try increasingly dangerous (and illegal) ways to take down the murderous counterfeiter.

Most of the characters sound like standard crime-and-punishment cliches. The hot-shot young cop. The naive greenhorn. The villain too slick for the authorities. The dirty lawyer working for the bad guys.

But it's Friedkin's fateful touch that makes it all work. William Friedkin ("The Exorcist," "The French Connection") has stated that one of the central themes in his works is fate, how people tempt and play with it. And pay the price. So instead of running the standard buddy-cop gamut (which was still in it's infancy; "Lethal Weapon" was still two years away), everything is drenched in realism. The characters that are constantly running on the razor's edge don't get back up when they fall. Everything is gritty and effective. This is "Lethal Weapon" without the Hollywood ending.

And the ending is not to be missed or spoiled. Quite simply it's jolting and a shock to cinematic sensibilities honed by action movie convention. To see how the Hollywood ending would've suited it, find the Special Edition DVD for the alternate (studio-suggested) ending. It nearly ruins what is a perfectly crafted plot.

The cast deserves recognition. Friedkin set out to make a low-budget movie, so he cast lesser-known actors. This actually benefits the picture in that any one of these characters could be the real deal. The performances are authentic and impressive, especially by the principals. William Petersen deserves a round of applause for his first starring role (his first film role was in Michael Mann's "Thief"). As Chance, he is a self-destructive thrill-seeker, purely focused on taking down the man that killed his partner. Pankow is equally as good as the agent at odds with his partner's disregard for any sort of rules. Dafoe is plain unsettling as Masters. He's a brilliant criminal, but his taste in women and art shows a peculiar side to him.

Likewise Friedkin pieces together a fine film. The camerawork is impeccable, but never intrusive. It seems to retain some of the director's "induced documentary" style he used in "The French Connection." The viewer feels as if they're following the protagonists further into their dangerous game. The cinematography is just gorgeous, courtesy of Robby Muller. The screen oozes style. Some have accused Friedkin of simply taking Miami Vice to the West Coast, which isn't entirely unfounded in the aesthetics department. The soundtrack by Wang Chung is memorable and a fitting complement to the movie, though some would say it dates it all.

If I had to pick one sequence that really stands out, it would have to be the car chase. I won't reveal the set-up, but Vukovich and Chance have to get away from seemingly a dozen cars, omnipresent gunmen, and eventually drive against the flow of highway traffic. It's thrilling, it's visceral, and it's my choice for the best cinematic car chase, beating out Friedkin's earlier chase in "The French Connection." But what puts the bow on the chase is the scene after, as the two realize just what they've gotten themselves into. Never have I felt so clearly the same dread as the characters. It has to be seen.

Overall, "To Live and Die in L.A." is an unjustly forgotten movie. It's become a personal favorite of mine. For Friedkin fans, I'd say it surpasses "The French Connection." It's by any measure a solid picture, and by most accounts, an overlooked gem. 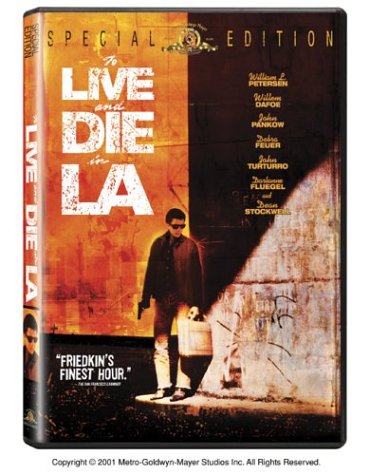 
Buy from Amazon Available on iTunes
The author's comments:
One of my all-time favorite movies and a pick for a near-perfect film, it simply needs more recognition.
Post a comment
Submit your own