Favorite Quote:
'When the first baby laughed for the first time, that laugh broke into a thousand pieces and they all went skipping about, and that was the beginning of fairies.' - J.M.Barrie

Everyone has heard of the three musketeers. If you haven’t read the book then you have seen one of the many versions of the film. Either way, you know how the story goes.

D’Artagnan goes to Paris to become a musketeer. He offends the three musketeers, Athos, Porthos, and Aramis. They arrange to duel but before they get the chance they have to fight the Cardinal’s guards.

The Cardinal is evil, plotting with Milady de’Winter to overthrow the king and claim France and power for themselves. They frame Queen Anne and the musketeers have to come to her rescue.

They steal back the diamond necklace and safe the day. Peace is restored. Until the next time.

All of this is the same in the film apart from a few tweaks in the plot.

At the beginning of the film there were just three musketeers and Milady of course. Their mission? To steal Leonardo Da Vinci's airship blueprints. They acquire the prints but are betrayed by Milady – who gives the prints to Buckingham. The musketeers are disbanded, leaving the three without a purpose and dear Athos with a broken heart.

So already we have a change to the plot. Milady is on the good side at the beginning of the story and the musketeers are disbanded because of a failed mission.

The beginning is the best part I feel. Each of the four characters is introduced in their own unique way – with Athos (Matthew Macfadyen) doing the voiceover. He continues this throughout the film and when plans are being discussed we see 3D images of buildings and maps.

D’Artagnan is introduced in the same way. Fighting guards and the musketeers but again the filmmakers tweak the plot a little. The four men get invited to the palace and are rewarded, despite the protests of the Cardinal, for their efforts in fighting the guards. King Louis is impressed and makes D’Artagnan an honouree musketeer.

The plot continues as normal, Milady plots with Cardinal Richelieu, to overthrow the child king by stealing the Queen’s diamond necklace and making it look like she is having an affair with the Duke of Buckingham. The results being unthinkable, the king would be forced to take action, execute Queen Anne and declare war on England. The people would lose faith in the king and Cardinal Richelieu would then be appointed leader of the country.

Of course, Queen Anne’s lady in waiting Constance hears of the plan and begs D’Artagnan and the musketeers to help steal the necklace back. They agree and go to London. There they fight Buckingham, but Milady has double crossed everyone again and taken the necklace with her.

The Duke of Buckingham has an airship in this film, courtesy of the plans stolen at the beginning. The musketeers steal his air ship. They then follow Milady and bring her aboard. The necklace is taken back and they return to France. But before they get there, Milady throws herself off the ship, into the sky and plummets to her death.

And little do they know a different kind of trouble is waiting for them in the sky. Rochefort has captured Constance and he and his men are ready and waiting to take down the musketeers.

‘All for one and one for all,’ is said. We feel like this should be the end but is it? Just before the credits role onto the screen we see Milady waking up on a ship – Buckingham’s ship. He is leading his fleet to war against France. The screen goes blank and the credits role.

A sequel perhaps? Who knows. It is over for now.

I went to the cinema with my family and my little sister’s friend. We sat in silence for the whole film, apart from the times when we all laughed out loud. The lights went up and the credits rolled u the screen. We exited the cinema and the look on my sister and friends faces said it all.

They absolutely loved it. The action, the romance, the comedy. The bright costumes and amazing effects had them hooked.

I saw the trailer for this long before I saw the critic’s comments. The trailer looked amazing and going on cast alone I would have gone to see it. Yes it didn’t get amazing reviews from some people but I really enjoyed it.

With technology advancing so much these days the effects of the film had the potential to be brilliant and they were. Though no effects were needed when sword fighting. They did all of their own stunts and you can see the real sparks fly when they sword fight.

The casting was spot on. They chose the right actors for the roles in my opinion. There is an equal array of British and American talent in this film which is nice, with a few actors being different nationalities also.

Freddie Fox is fabulous as King Louis and Juno Temple is equally as good as Queen Anne. They don’t have a lot of scene time but their presence was felt.

James Corden was born to play Planchet. He has brought something new to the role of Planchet – a comic side and it shows what a wonderful actor he is.

Constance doesn’t have a lot of screen time either, but her few scenes are good and of course the story would not be complete without her.

Now onto the baddies. The Cardinal, Rochefort and Buckingham are equally as bad. But for me Milady takes the prize.

Milady has to be one of my favourite characters. In the first few minutes of the film she shows her skills. I shall not give too much away but throughout the film she proves that she is much more than just a woman in a pretty dress.

And of course there is the famous four themselves – Athos, Porthos, Aramis, and D’Artagnan.

Athos (Matthew Macfadyen) – just the voice gets me every time. His acting was spot on, though I do feel he could have been slightly gruffer, slightly more heartbroken. But apart from that he was a good choice to play the ‘main’ musketeer.

Both Ray Stevenson and Luke Evans delivered great comic and acting performances as Porthos and Aramis. Porthos being the fashionable man and Aramis the ex priest. Both fans of the ladies.

Newcomer Logan Lerman was the perfect choice for D’Artagnan. His good looks and charm help him but it is also the acting. A perfect example of this is when he meets Constance for the first time.

He asks her, Enjoying the show?’
Her reply is, ‘Are you always this cocky?’
He then says, ‘Only on Tuesdays... and whenever beautiful women are involved.’
Constance then says, ‘So, you think I'm beautiful?
And D’Artagnan’s final reply is ‘Actually, it's Tuesday.’

I am a massive fan of the book and all the various versions of the films that have come before this one. This could have gone so badly – everyone knows the story; many have seen the older films and even more have read the book. But they pulled it off.

This film is bringing the classic story to a new generation. Action, romance and comedy, this film has something for everyone. 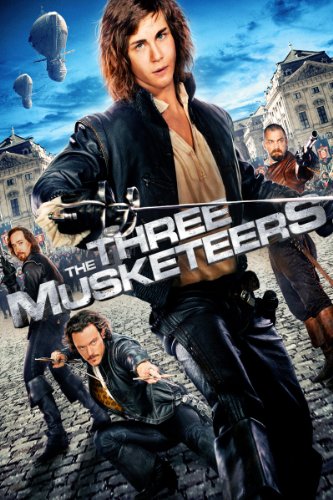 
Buy from Amazon Available on iTunes
The author's comments:
I took the first article down due to spelling mistakes.
Post a comment
Submit your own