Favorite Quote:
We are all in the gutter but some of us are looking at the stars- Oscar Wilde

I recently went to see the movie Parental Guidance, much to my dismay, with a group of my friends. Parental Guidance is a movie about a grandpa who is a just-fired baseball announcer, and his wife, a dying to please grandma, who needs to watch after their daughter Alice’s kids while she and her husband are away from the house. Alice didn’t want to call on her parents for babysitting because she thinks they parent unconventionally and would not be able to watch after them appropriately and not screw everything up. But, they come anyway and are devastated to find out they are “the other grandparents”, as in the ones whose pictures are hidden on the mantel behind other pictures. They meet three kids: Harper, a twelve year old girl who is a high strung and uptight violinist, Turner, a boy with a speech impediment, and lastly, Barker, who is an out of control five year old redhead with an imaginary friend named Carl, who is a kangaroo. Oh! And let’s not forget the very stereotypical Chinese man who cried when Carl “died” by getting imaginarily splattered onto the concrete when a car “ran over” him. Sigh.

This movie got horrible reviews (a 19% on rottentomatoes.com) and I had to agree with every single one of them. The so-called “comedy” was trying too hard to be funny. In this one scene, Harper (12 year old girl) is on top of the counter after just eating ice cream for the first time and yelled “You lied to us Mom! Yogurt doesn’t taste like ice cream!” This scene was trying so ridiculously hard to be funny that I actually rolled my eyes. And, maybe this is just me, but when everybody else in the theatre is laughing hysterically at a line that wasn’t even funny, I get kind of annoyed. But, I will admit, some lines were “eh” funny. Like, when Artie gets fired from his baseball announcer job because he wasn’t “21st century enough”, the guy proves his point by asking Artie what a hashtag was and Artie responded with “What the heck is that?”

And now, I come to my problem with the totally unrealistic quality of this movie. There is one scene where again they try to get laughs out of the audience by having Barker, who had to pee badly, climb up onto the half-pipe while someone was skateboarding on there and just start whizzing away since Artie couldn’t take him to the bathroom. There are so many unrealistic things about this scene that I barely know where to start. Most importantly, how did he even climb up onto the top of the half-pipe? He’s five for heaven’s sake! Second, even if he did manage to somehow climb up there, wouldn’t there be security to stop him and to try to get him down? Lastly, wouldn’t people NOTICE that there was a curly redhead peeing on a skateboarder? This movie was just too unrealistic that I could not laugh at scenes that some people thought were extremely comical.

But, now it is my time to mildly praise this movie. I have to say that the lines I only kind of enjoyed were Artie’s, the grandpa. Billy Crystal, a very talented actor who stooped to a new low by doing this movie, played Artie.

All in all, Parental Guidance is definitely a Redbox rental, if you even want to put yourself through that torture. It wasn’t half bad, but I would definitely not pay $10 to see it in theatres, which my friend’s mom sadly did. Though, it seemed as if I was the only one who didn’t like this movie out of my group, so who knows, you might enjoy it. Everyone else thought is was hilarious, but after seeing truly comical movies with the same PG rating, Parental Guidance just didn’t do anything for me. I thought all the characters were very one dimensional and annoying, except for Artie, and that it tried too hard to be funny and came off unrealistic. Basically, the only character in this movie that didn’t make me want to poke my eyes out with the Twizzler I was eating, was Artie. I give Parental Guidance a 2 and ½ out of 5 stars rating, and close my review with the statement of: don’t spend your money, folks. The however many hours you worked to make that ten dollars isn’t worthy of being spent on an obnoxious and over-played “comedy”. 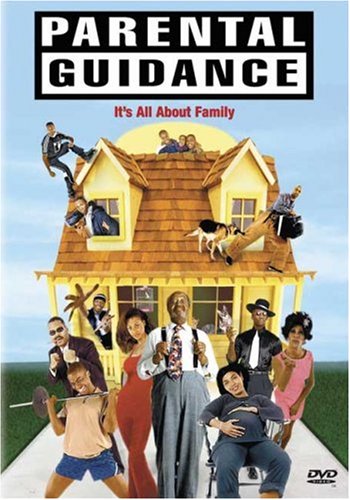 
Buy from Amazon Available on iTunes
The author's comments:
I recommend you don't waste your time and money to see Parental Guidance.
Post a comment
Submit your own