It is ages into the future, in a dark and mystically ravaged world nearly unrecognizable by present eyes. Mechanical beastions called Sentinels roam the world for mutants and humans alike. Yet they cannot be destroyed, biological makeup shifting to counter any skill a mutant may wield.

So when the X-Men take their last safe haven, they decide their last chance to end this war is not to fight it. It’s to stop it from happening altogether.

I must start off by admitting this was my favorite X-Men movie I’ve ever seen, right up next to “X-Men: First Class.” Here are a few reasons why.

“X-Men: Days of Future Past” ambitiously combines both the previous X-Men trilogy’s cast along with the prequel’s, Peter Dinklage (“Game of Thrones”) and Evan Peters (“American Horror Story”) among the instant classics that join the franchise. Due to that, it’d be easy to accidentally let this blockbuster slide into categories of cumbersome, confusing, and pushy. But I can look you in the eye and tell you otherwise.

It starts with the characters; nearly every single mutant we have grown to know and love appeared in the film, juggled meticulously and without pains. Havok, Angel, Beast, Storm, you name ’em. Motives were juggled brilliantly into play. And immediately embraceable new mutants from the comics popped up—Quicksilver, in particular, added a delightful new dimension of fun.

The plot had minimal loop holes, a feat I still consider remarkable in consideration of all Director Bryan Singer had on the line creating this movie. And the acting: impeccable. I can announce performances of James McAvoy’s [younger] Charles Xavier and Hugh Jackman’s Wolverine were my personal favorites; they each did so much emotionally. Jennifer Lawrence, Michael Fassbender, Ellen Page, and Nicholas Hoult were among the exceptional too.

But perhaps the greatest reason to see “X-Men: Days of Future Past” is the thrill. Rare is the movie that stimulates you to wonder, open your eyes, and rarer is the movie that keeps you willingly terrified along the way. This newest adventure with the X-Men gave that fantastical fear in action scenes, questioning morals, and surprises with every turn. There is no way to be cynically predictable, no way to not feel just a little more brave when our heroes and heroines face the greatest and most terrible. (Spoiler-ish Alert) The ending bombs you in the face.

So drop that bag of Cheetos and come to the arms of the X-Men. The legends themselves need you in the theater to witness as they make history. Literally. 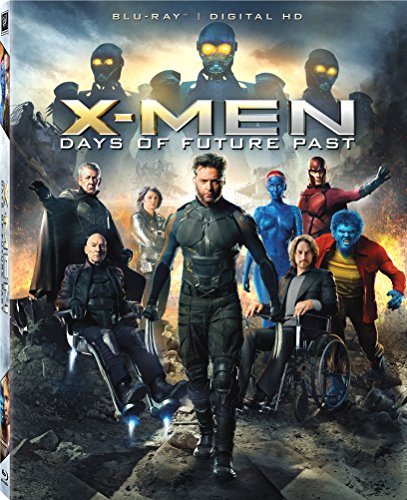 
Buy from Amazon Available on iTunes
The author's comments:
What does "THHRe" stand for? Good question! It's THE HOLY HITCHHIKE’S REVIEW...A shorter version of the Hitchhike, reviews of books, movies, music, and just about anything you can dream up. Enjoy, and let loose your commentary and suggestions below. A new column of THH every Friday!
Post a comment
Submit your own