Guardians of the Galaxy | Teen Ink

Guardians of the Galaxy

It’s really another day in the life of charming ruffian-thief Peter Quill, embarking on another little black-market trip to an abandoned planet—headphones on and everything. But with a few swift moves, he finds himself irrevocably pinned in the center of a humongous bounty, and soon the iciest and craziest assassins are after him for it as well, including deadly Gamora and the duo Groot and Rocket. But soon the galaxy starts to get a whole lot bigger as the little something Quill stole turns out to be an Infinity Stone, one of the most dangerous and powerful items in the universe.

Out in 2013, when the trailer was first released, I was…all right, I was horrified. The teaser then was just one video showcasing the five main characters under identification (freshly arrested), and it was so outright silly I was furious. I knew Marvel and I adored Marvel, and thusly was deeply offended it might be losing its signature touch of professionalism.

I was gladly proven wrong. Guardians of the Galaxy is a thrilling, incessant ride of archaic, impossible fun. Packed with the jewels of an all-star cast that includes Chris Pratt (The Lego Movie), Zoe Saldana (Avatar), Bradley Cooper (Silver Linings Playbook), Vin Diesel (Riddick), Karen Gillan (Doctor Who), Lee Pace (The Hobbit: Desolation of Smaug), along with newcomer (and real life wrestler) Dave Bautista, the fantastic performances aced it all. The action was sky-high, packed with enough intensity, human rage, and crude laughs for a cinematic sci-fi classic. Guardians was really just very impressive for a movie that had a genetically engineered raccoon and moving tree as some of the main characters.

But there were a few things, in my opinion, Guardians will never be able to master as well as The Avengers did (as the media often clashes the two for comparison). One is the freakishly tender human vein: I personally was able to feel more for Raccoon or Groot than Gamora (with respects to Zoe Saldana—I just didn’t particularly like how her character was done). The origins and emotions existed, but didn’t grasp and grapple like the uniquely tragic history of Steve Rogers, or the existential buff of Iron Man.

Another crucial miss was the villain. On screen, Ronan the Accuser provided a surefire presence—and little else. Flatly villainous and static, he was miles less entertaining than our poetic, heroically raging Loki of Asgard, the vengeful (and fan-favorite) god set on forcing humanity to “kneel.” In Joss Whedon’s epic, you enjoyed watching the villain take the screen as equally as our six heroes/heroines of angst—something Ronan just did not do.

Regardless, there is still a reason Entertainment Weekly dubs this film as “[s]till the Guardians of the Box Office,” and others even the biggest film of 2014.  An outrageously awesome new take on the universe and its baddies from both sides, the experience is out of this world. 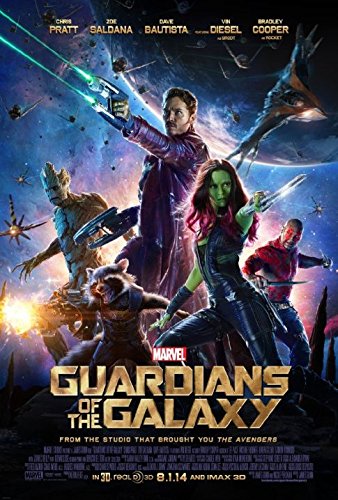 Plus, don't forget to comment below if you also saw the Tesseract's cameo in the movie and starting cackling like a crazy person in the theater.