Better known in France as “La Fille Du Puisatier,” The Well-Digger’s Daughter is a movie about a well-digger’s girl who falls in love with a dashing shopkeeper’s son, just as the Great War breaks out.

Like a breath of fresh air, director (and starring actor) Daniel Auteil’s palette of seamless French countryside, old-fashioned dwellings, and woodsy tradition brings life into a time you thought the world had forgot. Seeing the well-digger himself walk with his seven daughters behind him pricks dearly missed romantic nostalgia. And at the same time, a transcending vision of romance and family breathes immortality into a simply sweet story; you’re caught.

Astrid Bergès-Frisbey (starring as Patricia, also from Pirates of the Caribbean: On Stranger Tides, Suzanne in the Sea Wall) illuminates the screen like a bright white morning glory—her glimmering performance, alongside Daniel Auteil (playing the well-digger, M. Amoretti), Nicolas Duvauchelle (playing the shopkeeper’s son, Jacques Mazel), and Kad Merad (playing Félipe) are as refreshing as special to behold. The film itself is a jewel.

And another of its wonderful facets is The Well-Digger’s Daughter is so universal. Its story, though straightforward, strives to reach above and beyond language barriers—and succeeds. The monologues captured are as powerful in French as in English due to their delivery, my favorite being the one the well-digger gives to M. Mazel.

So despite how deeply dug you are into French culture, The Well-Digger’s Daughter is for all. Shining bright with an impeccable cast and picturesque directing, this movie will draw you in deep and never let go. 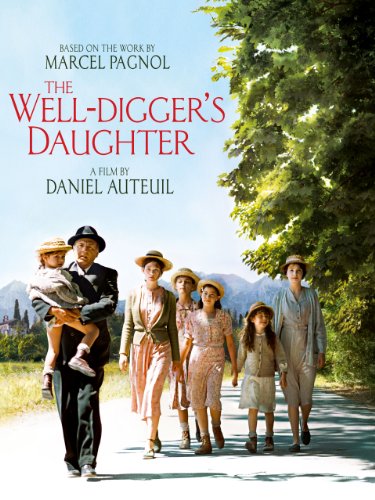