To tell the truth, I wasn’t entirely sure what to expect when I got that Godzilla DVD in my Netflix envelope. I mean sure, I knew it was a monster movie with a giant radioactive lizard, and I knew that the one guy from “Breaking Bad” was in it because that’s all that the news cared to talk about. But I didn’t really know what I was getting if that makes any sense. Would it be scary, sad, funny, or just plain bad? The only way to find out I supposed was to open that red envelope, and what I found inside was a pretty good treat.

The movie begins in the Philippines, circa 1999. A mining company has unearthed the skeleton of some long ago deceased behemoth along with a couple of egg sacs. One of the sacs has already hatched. The unknown creature has bored a hole into the side of the mine and crawled out into the ocean. Miles away at the Janjira Nuclear Power Plant in Japan, Joe Brody (Bryon Cranston), the plant’s supervisor, is getting readings on massive seismic activity, activity that is too regular to be an earthquake. Worried that the shockwaves might damage the power plant, Brody has his wife (Juliette Binoche), who also happens to work at the plant, investigate what is going on in the lower levels of the reactor. Unfortunately the damage to the plant is extensive enough that while Mrs. Brody is investigating the reactor begins to cave in, forcing Mr. Brody to seal off the contaminated level and his wife along with it.

Fast-forward 15 years later to the present day and Brody’s son, Ford (Aaron Taylor-Johnson), is a lieutenant in the US Navy. He has just arrived back stateside to be with his wife (Elizabeth Olsen) and son. However, the Japanese consulate calls the very same night and Ford is forced to fly to Japan in order to pick up his father from police custody. Joe Brody, now desperate to get into the site where the power plant once stood, is convinced that the event that destroyed the plant was no accident, but actually the work of some primordial beast. Brody convinces Ford to follow him into the now restricted area around the reactor. They are subsequently apprehended by Japanese officials and are taken to a secret base constructed amongst the ruins of the power plant. From there total mayhem ensues as tests that scientists are running on the hatchling from 1999 go terribly wrong. The primeval creature’s escape attracts the attention of the famed Godzilla who hunts the newly hatched moth-like monster. Chaos reigns as Godzilla and his nemesis battle it out across the Pacific.

I’ll preface this all by saying that this movie was far better than I thought it would be. Then again, after the disaster that was 1998’s Godzilla, I didn’t have much to go on.  In all, the visual effects were the best part of this flick, with the director teasing just bite-size images of Godzilla until about half an hour or more into the movie. While that might sound disappointing, it is done really well, showing just enough of the monster to build suspense until that fateful moment where a wide pan reveals the ultimate movie beast.

What could’ve been improved upon is the acting, and especially that of the central characters. Despite Bryon Cranston receiving top-billing, he is completely underutilized and SPOILER ALERT: is only in the movie for the first twenty or twenty-five minutes. I was utterly disappointed at this, especially when I was left with the rather wooden acting of Aaron Taylor-Johnson as substitute. However, infrequent screen time with Watanabe and Strathairn helped to ease the pain. A plethora of action sequences that involved little character building aided too.

Overall, this was a pretty good film, and like I said, it surpassed my expectations. Some poor acting drags it down a bit, but really I never expected to get a character study with this. In all honesty, Taylor-Johnson works best when he’s simply trying not to get stepped on by Godzilla, which is just fine with me. 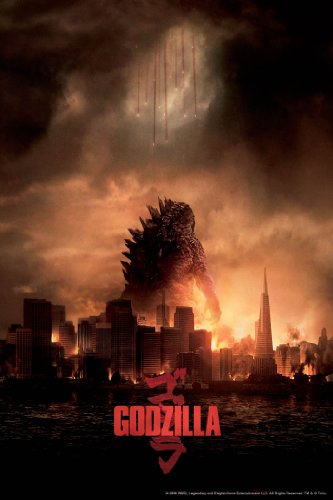 Better than what I thought! Go see it if you’ve got the chance!