Major William Cage (Tom Cruise) faces a crisis; the world has disintegrated into unsolvable chaos, with an alien race of Mimics intent on taking the Earth for good. But that’s not his problem; he’s content on advocating the latest military battle tech, Exosuits, until he himself is actually placed on the front lines. In a major battle, something incredible happens: splattered with the blood of an Alpha Mimic, he inadvertently enters the nervous system of the time-wielding aliens, headed by the ultimate Omega, who has the ultimate power of resetting the day to its satisfaction. Now, Cage holds that power as well, and the fate of the human race lies in his hands. He has only once choice: Live. Die. Repeat.

For those who fear yet “another apocalyptic movie,” it could seem so in passing glance. For example, the Exosuits that topple posters yield intense Pacific Rim vibes, and the CGI’d Mimics are far from original designs. (In fact, the movie itself is based off the Japanese light novel “All You Need Is Kill” by Hiroshi Sakurazaka.)

But the intelligence in the film’s wheels gets it racing. Time manipulation (and ensuing chaos) is far from overdone, and the stakes are high with an excitably clever plot. What’s more, the film hits wildly funny ridges, especially when Cage knows exactly what will happen and shocks everyone around him.

The excellence doesn’t end there. Characters are formidable, wherein the “good guy” might be a little hard to spot at first. Indeed, the Cage we meet in the beginning of the film is more a cad then the classic hero(ine) we expect to see smashing in an extraterrestrial empire. But the film makes a startling case towards humanity. And even though it is over a repeated day the film takes place, we see emotion and frustration shape Cage into a changed man. A somewhat less direct, while equally impressive character build shapes other main Rita Vrataski (Emily Blunt), déjà soldier who trains Cage to take control of his now crucial role in the war.

Edge of Tomorrow is far from the next sci-fi bummer; in fact, it’s the next fantasy move with edge (ha…ha…). Armed in wit, depth, and wild wild entertainment, you’ll be dying to check out a copy to watch and live it yourself. And die of excitement. Repeat. 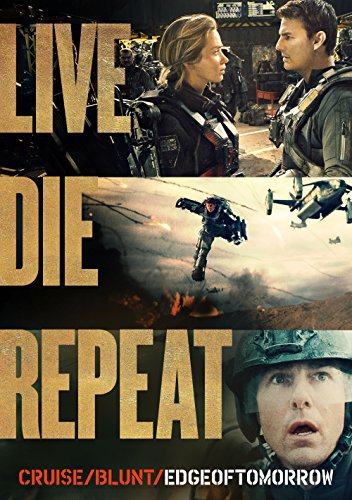 Not to mention, it's a double week! Check out the other THHRe edition that comes out, a review on the beautiful Cinderella (2015).