Jupiter Jones (Mila Kunis) believed in fate once, much like her astronomy-obsessed father; now a toilet-cleaner pigeonholed in a den of Russian relatives, Jupiter has lost but all hope in her own destiny. But a slew of alien Keepers are on the hunt for her, leased by one of the greatest dynasties in the universe: specifically Balem Abrasax (Eddie Redmayne). And the house of Abrasax wants her for one reason; Balem’s sister Kalique Abrasax (Tuppence Middleton) and brother Titus (Douglas Booth) also know she holds claim one of the most valuable estates to inherit: Earth. Jupiter will be joined by Caine Wise (Channing Tatum), a ravaged Lycant half-breed to save her from nearly assured doom; or the universe will pay the price.

Those eagerly awaiting the next marvelous female heroine will have to…sit down, because she’s yet to arrive. Ascending has its redeeming quirks, technological flow not being one of them; while the entire point of Jupiter being a girl is so pointed it’s ridiculous. Constantly shepherded by on the back of a flying werewolf (no kidding), Jupiter is thrown into events that end in her progressive endangerment, distress, and repeated rescue (again, no kidding). Her greater decision in the movie literally involves getting married to an attractive prince. Intergalactic royalty or not, Ms. Jones is sure to offend any remote feminist in the audience as Kunis is tossed frame to frame like a ragdoll. And Jupiter’s long awaited glory moment of combat finally comes in beating the heck out of Stephen Hawking—wait, sorry, Eddie Redmayne—which feels unfortunately a bit too little, too late. And by then, she’s readying for her next rescue.

Not to be outdone by maintaining gender stereotypes, Tatum embodies the no-dimensional ravaged guy hunk. (Who’s not just a normal werewolf, either; Caine claims to have been bred for the military and has “…more in common with a dog than with [Jupiter].” Regardless, I saw Elf ears.) His character evolution ends in having his frenemy urge on his instinct to protect beautiful endangered women. And I guess I’ve gotten used to it, but, spoiler alert: Sean Bean (playing Stinger) doesn’t even die in this one!

It’s not just the characters that are periodically disappointing; the entire storyline feels bolstered by continual vaccinations of recycled cinema. Threaten the girl’s family and she gives in? Done. A werewolf romantic lead? Done. The “but why me” mantra and subsequent “you’ve got the wrong person, I’m too ordinary”? Done and…done.

Fitful bursts of techno whiz meant to impress the AI-obsessed generation sporadically appear, propping up a plotline that whizzes around your head and gives you a headache. Anyone without subtitles rolling is dead meat—the Epic Capitalized Names and Titles suggest potential backstory worth a whole Star Wars length setup; but within roughly 2 hours duration, the great immortal themes fly above your head. Though the costume design and CGI material is, admittedly, the stuff of gods. As a kid born in the millennial age, I’ve wondered to myself several times if our green-screening abilities may outscore actual outer space. I’m sure the real Stephen Hawking would disagree; nonetheless, it’s not quite enough to enlighten this movie. Jupiter is descending. 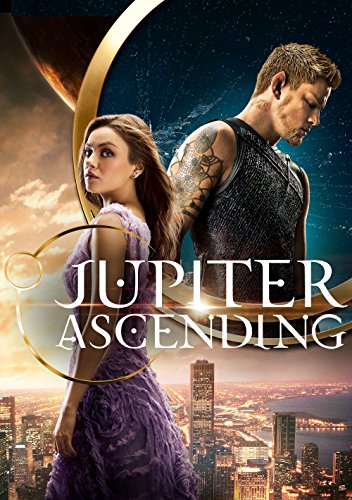