The Agony and the Ecstasy | Teen Ink

The Agony and the Ecstasy

Michelangelo Buonarroti (Charlton Heston) painted the ceiling of the Sistine Chapel. But not willingly; Pope Julius II (Rex Harrison) forcefully commissioned the sculptor to a project he would struggle to finish for the next four years. Few could have imagined Michelangelo would spend those years on his back, blinking through peeling paint and crappily lit workplaces. But for all the human impatiences and personal jurisdictions Michelangelo faced, nothing could cloud what would become a queening monument of Christendom.

Gratifyingly, Michelangelo doesn’t spend all of his time pondering his cursed genius. Michelangelo is shown as he probably painted the ceiling 500 years ago, driven mad over technical spoofs, outside pressure, and an outrageously bad salary. Even Raphael Santi, fellow Teenage Mutant Ninja Turtle of the Renaissance, didn’t spend most of his time horizontal, doing something other than his trade for years. (Michelangelo actually preferred to sculpt. David can testify.)

Other aspects of the movie don’t shoot as high. The character of the Contessina de Medici (Diane Cilento) is constricted to a pining amour, whose flowering kisses draw little attention from a gruff and unrecognizing Buonarroti. Thanks for sticking a female role in there. Now if you could let her do something… Buonarroti mulls over his talents with a single bitter expression; and the legendary Rex Harrison, portraying the “warrior king” pope, swings so fast between moods it’s hard to keep up. He acts like a secular figure wrapped in white robes, unnervingly more interested in the money than any scripture.

Which is ironically what makes the movie so historic; the roots of the Protestant Reformation, where spiritual leaders’ secular motives become questioned, is displayed proudly. Sharing the spotlight with the Creation of Adam is also the historical context of Italian city-states blowing each other apart; students craning to see the screen during their Humanities class might not expect to hear the pope confess his ultimate fear, that incoming invaders might destroy the Sistine Chapel before Michelangelo could finish it. But as many of us know now, that isn’t case. There’s a reason the still-life wonders of Michelangelo’s ceiling will testify to the ends of time: it really is the agony and the ecstasy. 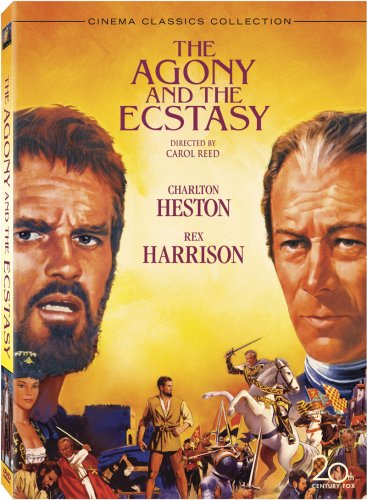