The Taming of the Shrew | Teen Ink

The Taming of the Shrew

Franco Zeffirelli, arguably the greatest Shakespeare director of all time, brings to the screen another of the Bard’s beloved works. Young Lucentio (Michael York) is a scholarly newcomer to Padua. He soon falls head over heels for the young maiden Bianca (Natasha Pyne); unfortunately, Hortensio (Victor Spinetti) and Grumio (Cyril Cusack) also want her as their wife. But Bianca’s father, Baptista Minola (Michael Hordern), refuses to allow his youngest daughter to marry until his older daughter has, a creature of anger and defiance named Katharina (Elizabeth Taylor). Wild schemes ensue to find the man who will wed her--until Hortensio discovers Petruchio (Richard Burton), a swaggering buff willing to marry any woman for money. And the taming of the shrew begins.

Themes throughout the film advocate for intellect, and saber wit; the titular “shrew” is an outspoken tour de force whose comebacks are whip smart. Leads Taylor and Burton swing through scenes of rigorous physical comedy--not only do the actors enrich their own characters, but they better each other. Even when the real-life husband and wife are tossing insults, sparks fly.

The music is as sumptuous as the costume design. The shrew’s dresses are extraordinarily period and lavish, not to mention the practically perfect scenery; when Lucentio rides into town with Tranio, cluelessly optimistic, they blaze by a couple of condemned fools labeled “drunkard” and “wife-stealer” by the wooden signs around their neck. Zeffirelli takes the care to create a playful atmosphere for the film, and little laughs touch up the film into a complete comedy. A couple of fourth wall winks are even made as Tranio addresses the camera, and Petruchio, sitting comfortably, hums to the orchestra playing in the background.

The classically Shakespearean plot dominates the movie. After all, Billy Shakes did have a hand for manipulating people’s names and identities, which weaves The Taming of the Shrew into a particularly clever farce. But the jewel of the plot, and the ultimate resolution to the film, is not about people giving each other names: to help Petruchio win a pricey bet, Katharina brings down the curtain with a fiery speech about the obedience a wife owes her husband. By modern standards, I was stunned. The Bard’s works are for all time, but the ending to such an excellently played story was outright disappointing. I didn’t understand how Katharina’s utter submission to her husband could translate into true love, or why there was triumph in watching an independent young woman lose her own opinion. Was it really the taming of the shrew? 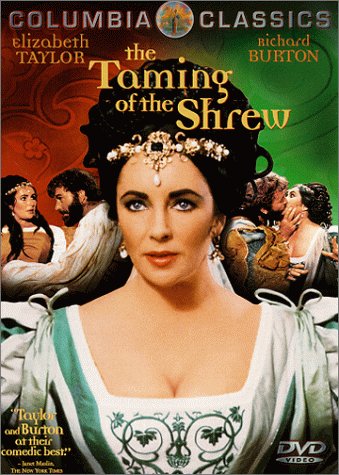