From the ruins of the Galactic Empire rises the First Order. Under the command of General Hux (Domhnall Gleeson) and Kylo Ren (Adam Driver), it seeks to consume the galaxy under dark forces. To fight it, Princess Leia Organa (Carrie Fisher) needs to find her brother, Luke Skywalker (Mark Hamill), who has mysteriously disappeared into the depths of the galaxy. She commissions the best pilot fighter in the Resistance, Poe Dameron (Oscar Isaac), to find the map that will lead them to the Jedi. With the help of a deserting Stormtrooper (John Boyega) and a desert scavenger named Rey (Daisy Ridley), the Resistance will take on the greatest threat yet to the galaxy.

Countless Star Wars parody ads flood the screen, and then the room goes dark. Humans and their littler human counterparts chitter as the theater continues to fill. The guy sitting next to me chews even louder.

Trumpets blare, and then the Star Wars logo enters with full force. The pop cultural phenomenon of American sci-fi enters in an opening crawl.

A long time ago in a galaxy far, far away…

It’s only been 10 years since the last Star Wars episode dazzled theaters. In 2005, Star Wars: Revenge of the Sith ended the prequel trilogy that starred Hayden Christensen as Anakin Skywalker, and Natalie Portman as his star-crossed lover, Padmé Amidala. Only now, we go forward 30 years in time, to discover Han Solo is now silvery haired, Princess Leia Organa too, and Luke Skywalker has disappeared. It’s time for new faces to take on the expanding universe of a galaxy far, far away…

And the good news is...it’s good. (THANK YOU, J.J. Abrams) There’s as much heart in the opening chapter of this new trilogy as ever; the dialogue persists to be “Star-Wars-esque,” and as Boyega describes in an interview, full of belly laughs. (Of course, it’s the Stormtrooper that brings lots of the comic moments throughout the film.) Whizzing jet chases and desert landscapes persist to be as nostalgically familiar as surprisingly fresh. It feels like we’ve returned to the cinematic universe we’ve never truly left, and new characters fulfill the old desire for the lovable hero.

There are lots of big names in the star-studded cast, such as Gwendoline Christie as Captain Phasma (you know her as the sword-wielding Brienne of Tarth in Game of Thrones), and Lupita Nyong’o as the alien pirate Maz Kanata (also Oscar-winning Patsey in 12 Years A Slave). But it’s the fresh-faced newcomers like Ridley and Boyega who really steal the show. Ridley, playing Rey, is as fierce as she is graceful discovering the Force, and Boyega overwhelmingly likable as Stormtrooper-turned-Resistance-fighter; it’s him you really empathize with throughout the film. Driver, on the flipside, is the mysterious undertaker of Darth Vader’s legacy with a surprising past, and the First Order regime carries a frightening resemblance to Nazi nightmares in WWII. It’s the cast that excites, taking on new heights with various ethnicities and a definite female lead.

Although we all know the “roly poly droid” BB-8 is the real star of the film. The whirling, rolling, tasing little creature is like a robotic version of a naughty pet or little child, and does well to meet up to R2-D2’s original charm. And while themes throughout the film aren’t earth-shatteringly new, where Episode VII takes significantly after the pace of the original trilogy, it’s a flawless blend of old and new for a great new series of adventures. The force has indeed awoken. 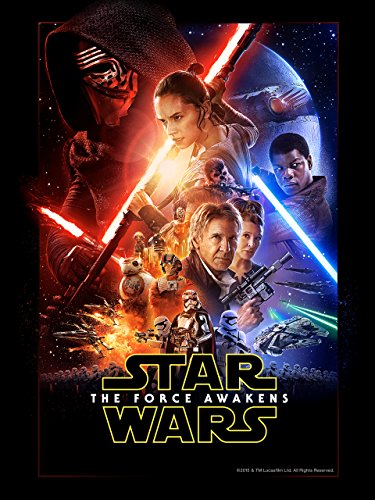