Inside Out | Teen Ink

They literally live in her head--Joy (voiced by Amy Poehler), Sadness (Phyllis Smith), Disgust (Mindy Kaling), Fear (Bill Hader), and Anger (Lewis Black). They love their girl Riley (Kaitlyn Dias), and have been there all her life, helping her do everything from store important “core” memories to dodging monkey business. But then her family moves to a dumpy little apartment in San Francisco, and the emotions go into overdrive. Every part of Riley’s personality, from her humor, family, friends, and hockey, seems threatened. Even worse, Joy and Sadness have become lost in Riley’s long term memory, and need to get back to headquarters before it’s too late. That is, before Riley resorts to desperate measures, stuck with only Fear, Anger, and Disgust in her head. Will they get back in time?

Clever, charming, and made with all of Pixar’s original magic, Inside Out is a whirlwind adventure for every age. The movie tackles “growing up” in the sense that it handles change: like AAAGH!!! moving, AGHHGHGH!!! a new house, or AHHHHH!!!!!! the first day at a new school. Well. There goes my imitation of Fear. But even though the film literally takes place in an eleven year old’s head, the universal themes of adapting to change, sometimes unwillingly, will pull on the heartstrings of any audience.

And not only is the movie mature, but surprisingly symbolic--adding layers to everything from Dream Production’s winking “reality distortion filter” to the relationship between Joy and Sadness. At the beginning of the film, Sadness finds herself compelled to reach forward. But as she touches a memory, it turns blue, forever sad. Not even Joy can turn it back. It’s the juicy metaphors like these that the movie tackles, and the deeper you dig, the more there is.

And did I mention funny? You get a tour into a couple of other people’s heads too, where their emotional crews reside. Spoiler alert--all the Dad emotions have moustaches. The adventures that the emotions undergo, specifically Joy and Sadness, are uproaringly fun. Even if you’re not interested in the deep stuff, the little perks and puns (literally, a train of thought!) will keep you wildly engaged. But what makes this film so accessible, by all ages, is a combination of it all. The themes, the symbolism, and the laughs--now that’s what turns all of us inside out. 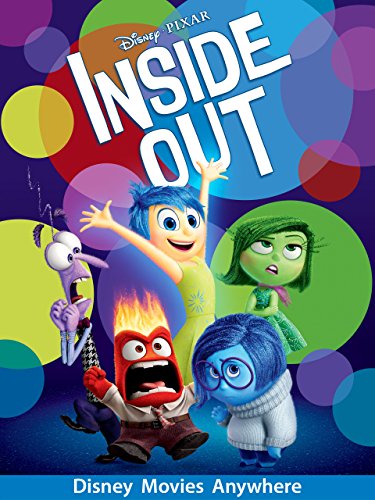