The charming, smooth, and frankly narcissistic Lord Goring (Rupert Everett) faces one small problem: he simply doesn’t wish to marry. Unfortunately, marriage is all his father Lord Caversham (John Wood) can talk about, and his friend Sir Robert Chiltern (Jeremy Northam) can worry about. When the indelibly mischievous Mrs. Cheveley (Julianne Moore) arrives in London, she threatens to upturn the honor of the Chiltern family with political blackmail, promising to publicize proof of a private scandal if Sir Robert does not come to her terms. But Sir Robert can’t bear to break the news to his beloved wife Lady Gertrude (Cate Blanchett), who holds him to a godly ideal. As Lord Goring hurries to make do with the perfect mess unfolding around him, poor Miss Mabel Chiltern (Minnie Driver) also becomes caught up in the confusion. Bouts of dazzling repartee, clever drama, and the trademark ingenuity of Oscar Wilde touches the screen once more in this 1999 adaptation.

As soon as the movie began, I was struck by the magnificent scenery, setup, and dress. The endless twinkling balls and marble halls paint a sparkling picture of fashionable period England, where one’s public honor is a man’s most important accessory. Equal part drama, romance, and winking social satire, the film also functions as a trip to an entirely different time and place, where the scenery is as keenly captivating as the plot.

And while the original play by Oscar Wilde tends to follow Sir Robert Chiltern, a modest, likable politician, the movie chooses Lord Goring, the quintessentially smug, rich, and charismatic bachelor of London’s sumptuous elite. Goring’s dynamics are matched delightfully well with his wordsmithing opponent, the darling Miss Mabel Chiltern; their quipping exchanges are, as ever, the highlight of Wilde’s wit in action. And for those less entertained by the drama, their whip smart conversations keep the pace of the film quick and fresh, much like the plot, which never fails to surprise at every turn.

But the several love stories featured in the film are what truly stir the heart. Wilde makes vital remarks on the imperfectly perfect nature of relationships; as we watch Sir Robert and Lady Gertrude struggle with communicating their hopes, flaws, and ambitions, we see them reflected in ourselves, and our attempts to connect with others. The key concept of marriage is examined with a wise eye, depicted in all of its passionate glory, faults, and resilience. It’s a film that speaks marvelously to any audience; indeed, not even an ideal husband is required here. We accept who we choose to love. 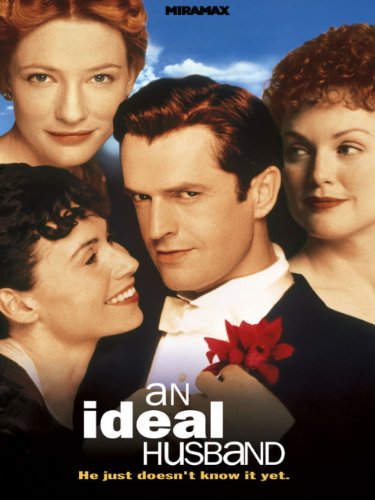