Steve Rogers, better known as Captain America (Chris Evans), finds himself facing a world unready to accept the Avengers as an independent peacekeeping force. A solution is presented to them: the UN proposes a compromise called the Sokovia Accords, named after the country left demolished after the Avengers had to destroy Tony Stark, or Iron Man’s (Robert Downey Junior) failed experiment, Ultron. Rogers finds himself confronted with Stark, who has resigned to the compromise, as well as Rhodey (Don Cheadle), Natasha Romanoff (Scarlett Johanssen), and Vision (Paul Bettany). But before long, things take a whole new turn as the Winter Soldier, Rogers’s old friend Bucky Barnes (Sebastian Stan), is discovered, and a mysterious hero Black Panther (Chadwick Boseman) enters, on the hunt to revenge his murdered father.

Things get messy when you’re always trying to save the world. But Marvel’s latest addition its cinematic universe, Captain America: Civil War is the best kind of hot mess: not only is the film decked head to toe with expertly executed, adrenaline-inducing fight scenes, it’s also a nail-biting blend of brilliant, unexpected character development and classic Marvel wit. From the start, the movie is hit with an array of conflicting forces: outside the Avengers team, and within. Clashing sets of morals, egotistical maniacs rampaging for revenge after the havoc wreaked during Avengers: Age of Ultron, and the tension between the team’s immediate leaders, Rogers and Stark, all weave themselves into a plot thick enough to sit on. The film not only includes the aftereffects of previous movies, but also invites us to discover more and more about the pasts of characters we thought we already knew so well.

The addition of new members to the Avengers, familiar and less familiar, is also less overwhelming than it seems. The wise-cracking, streets-and-computer-smarts “little guy" Scott Lang (Paul Rudd), or Ant-Man, adds a size difference to the lineup, and your other friendly neighborhood bug-based hero, Peter Parker (Tom Holland), or Spider-Man, swings around dousing everyone in flying jokes and quips. Falcon teams up with Bucky for the first time; Vision has a first attempt at cooking. Wanda Maximoff, or Scarlet Witch (Elizabeth Olsen), enjoys more screen time, and an even grander story arc to follow up her origin in Avengers: Age of Ultron.

But it’s the introduction to the Marvel cinematic universe of Black Panther, already confirmed to have his own solo movie in two years, that brings a brilliant new pillar to the team’s foundation. Film directors Joe and Anthony have admitted to feeling the most pressure in bringing Black Panther to life, while still managing to succeed with flying colors; Black Panther, also known as T’Challa, is a vengeance-driven, arrogant king-warrior of the technologically advanced country of Wakanda, raging the screen in a stunningly crafted suit of black vibranium and feral cat claws. It’s hard not to feel a sense of awe at the introduction to such a grand character. Like Captain America and Iron Man, he sticks to his own set of beliefs before anyone else’s, and is arguably an independent force throughout the film, set on revenge after his father’s untimely death.

And it’s the development of returning favorites, such as of Captain America, the loyal, self-sacrificing classic we’ve come to know intimately throughout the Captain America trilogy, that tugs on our heartstrings and keeps our eyes glued to the screen. Cap’s rivalry, and eventual battle with Iron Man, the smart-mouthing tech whiz we met before any other Avenger, is simultaneously shocking, engrossing, and bittersweet. We watch as two people of two very different principles clash over their fundamental beliefs, at a time where the American public is equally divided over the 2016 presidential election looming ahead. The ideological imbalance prods at something deeper: something that was there all along, ever since the Avengers first assembled in New York to defeat Thor’s power-hungry brother, Loki.

For a project so tremendously big, Captain America: Civil War still maintains an approachable edge, filled with all too clever setups and perfectly timed comic moments. It also sets up perfectly for the upcoming sequels to the previous Avengers films, Avengers: Infinity War - Part 1 (2018), and Avengers: Infinity War - Part 2 (2019), both slated to be directed by the Russo brothers. It’s something to get excited about; especially since this is the best civil war we’ve ever seen. 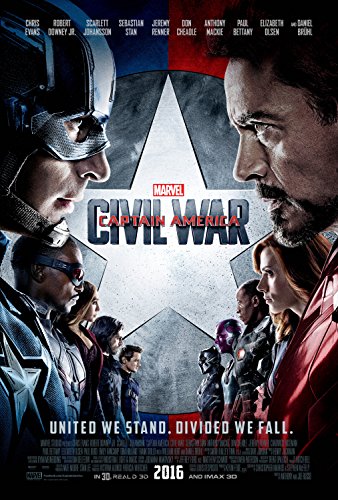