Jean Valjean (Hugh Jackman) has spent nineteen years in prison, under the cruel watch of policeman Javert (Russell Crowe). But when Valjean breaks parole, a kindly old bishop (Colm Wilkinson) brings him to faith, inspiring Valjean to change his ways. Years later, he is the manager of a successful factory, which employs the young mother Fantine (Anne Hathaway). Valjean rescues Fantine when she is cornered by the police and his old enemy, Javert. Sick and on the verge of death, she begs him to take her child Cosette (Isabelle Allen) under his wing. Together Valjean and Cosette flee from Javert, returning years later to a city aching for revolution. Marius (Eddie Redmayne) and several other young men yearn to upturn the streets of Paris for the poor, until Marius falls hopelessly in love with Cosette (Amanda Seyfried). In a country slowly spiraling towards chaos, Valjean is caught in the battle for freedom once more.

At last, the musical version of the French classic hits the screen, having lost none of its Broadway glamor. Director Tom Hooper’s rendition of iconic songs like “I Dreamed A Dream,” sung on soprano by Anne Hathaway, and “On My Own,” by the stunning Samantha Barks, feel downright magical, almost live. And in some ways, they are--Hooper affirmed all the songs were shot on the spot, rather than in a recording studio months earlier. It’s hard to believe, since the singing quality is still so rich, authentic, and above all, deeply stirring; and in that way, Hooper pays tribute to the longstanding tradition of making Les Mis feel personal, real.

The music brings the story roaring to life. From the twining duets of lovers Marius and Cosette, to the blind rage of prisoners kept under Javert, the story reaches into the masses, taking individual stories and weaving them into a masterpiece of sound and energy. Even the simplest of words hold intense power--the bitter unrest of old France is seen through people who face choices, tragedy, and the sheer force of change.

It’s hard to assemble a cast for as grand an undertaking as Les Mis, let alone juggle the rigorous singing and acting involved. Still, Hooper’s 2012 French crew more than fits the bill. None could be better fitted for the role than Hugh Jackman, who plays the story’s leading character, Valjean; he embodies a man who faces a world seemingly against him, and whose revelations in the face of God make a healing balm of peace and kindness. He also represents the greater message of Les Mis--that ordinary people can do the extraordinary, bringing light into a cruel world. The dream has come to be. 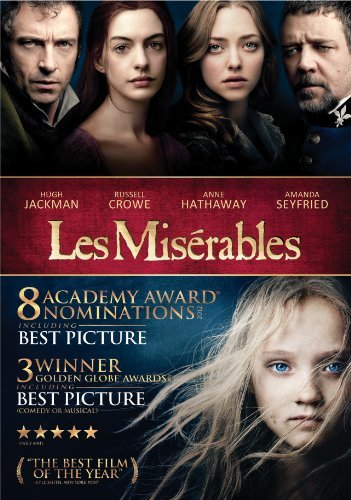